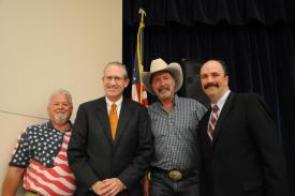 An estimated 100 people attended, according to Dolores Canizales, President of the Poway Chamber of Commerce. The Chamber cosponsored the event along with the Green Valley Association; GVA President. Steve Stone served as moderator. Questions came from both sponsors and the audience.

Themes in this forum echo those all over the county. The end of the development boards has hit cities hard and has led to money issues. Poway was not alone. Mangum pointed to this early on in the debate. According to him the school district has faced budget cuts, and “now it is [the city of] Poway’s turn, since the redevelopment assets have been lost.”  That led to an 8% budget loss. In spite of that, the City still needs to maintain its infrastructure and other assets.

Cunningham, who has also served as Deputy Mayor, said in his opening statement that within seven months of entering Council, he faced the first crisis. It had to do with a reduction in water use by 40% in two years. He said he listened to all experts he could find, and to the people. He also researched the issue and has “met goals and needs.”

When asked how they would improve the business environment, Cunningham said that he would let local businesses compete for City contracts, and would like to “see a light advantage.” Chiefly the city needs to listen to business needs, in his view.

Vineyard agreed with Cunningham. He added that businesses and the City “get along fine.” He added that the Chamber works very hard to achieve a “business expansion,” which is on tract.

Vaus said that former Councilmember Marilee Boyack started that effort, and that she has endorsed him. He added that the city needs to streamline databases, and that there is a very robust relationship between the City and the Chamber.

Vaus works in marketing and believes  the City of Poway needs a signature event to attract people to shop in Poway. He also suggested that Costco can be a great partner to the community.  He emphasized that downtown needs to be further developed.

Mangum said that red tape is affecting businesses trying to set up shop. He gave the example of a business that was trying to get into the business park and almost gave up. Talking directly to Council “allowed that to happen.” He agreed with the rest that while the relationship with the Chamber is strong, it still can use some work. It might be time to form a “Poway Committee for Business Relations.” But chiefly, it is having a welcoming attitude to new businesses and old businesses alike.

With the age of tight budgets, candidates were asked about priorities for spending. All four candidates essentially agreed that health and safety were critical and the chief priority.

For Mangum, the chief question after that is what makes Poway, Poway? After core services are taken care off, what other services does the community want to keep funding? Would these be the sports parks, the Center for the Performing Arts? These are secondary services that people need to have a voice in, he said.

Cunningham told the audience that  Council did have to make cuts and reorganize services. But they “delivered balanced budgets with no new taxes.” As far as public safety, he said that if these services are not well funded, that will be the first thing to affect your quality of life.

While Vineyard agreed that public safety is number one, he also said that firefighters have told him that “they are underpaid and overworked.” He would like to see the volunteer program restarted, to supplement professional fire fighters. This way medical calls can be answered by both volunteers and paramedics, releasing the engine to respond to fires if needed

When they were asked about opening lines of communication with the public, candidates generally agreed that this had to happen. It was in the methods where there was variation.

Vaus said that citizens should have a voice. He said that he learned this lesson from working in the Chairman of the Budget Review Committee: community participation is paramount. Once again, he asked, what is Poway and what it means to live in Poway?

Vaus emphasized that the people have to have a role in their own quality of life and what they want to fund. This should be a community and business effort; we should emphasize human scale development. He added, “I want you to be the boss.”

For Mangum complying with the Brown Act open government mandates is not enough. He proposed that the City Council should meet three to four times a year in different places outside Chambers and have town hall meetings. In his mind opening lines of communication is critical.

Cunningham touted his experience with the Veterans Park which was a public-private partnership. The same goes for the citizens of the Valderve area, who needed traffic signals, He maintains he is there to represent the people and listen to the people.

Vineyard said that part of the problem is the apathy that exists among most citizens. There was a water fee raise and only 30 people showed up at Council to protest. To his mind, the people need to be polled.

On the development of East Poway around the Old Coach Road and water usage by the Maderas Gulf Course, all four candidates agreed that the city should not pay for piping water up there, and the cost would be prohibited. Yes., the water table seems to be affected, and wells are going dry, but the cost of changing this is prohibitive. They also all agreed that more research is needed and that residents have priority over businesses, especially since residents have been there far longer t the golf course.

Regardless, both Mangum and Cunningham agreed that both sides have to be listened to; Mangum added that he cannot come clearly on one side or the other since the City lawyer has advised that this is a live issue. Still, any burden of proof is on the applicant side.

When revenue and how to increase it came up, they all agreed that the sources of income for the City of Poway come from sales taxes, property taxes, fees and permits. Most agreed that they did not want to raise sales taxes, which are the lowest in the county.

Cunningham said the City has received $200,000 more than they expected, which is a good thing. What he wants to see are property values go up, leading to property taxes going up. This means that the City needs to remove red tape to improve properties.

Vineyard simply said, “We are taxed to death.”  But since we lost redevelopment, sales taxes would be the best route since they “would affect all the least.”

To Vauss, what Poway needs to raise revenue is to promote the City and businesses. “We need to tell Poway’s story,” he said, adding, “We need to be ready to strike when the economy improves” to develop the downtown area.

Mangum agreed that taxes primarily come from property and sales, and he agreed with Cunningham that we need to improve property values. He also encouraged the audience to buy their gas in Poway. If drivers fill up once a month “It will help to close the budget deficit by a third.”

One difference in the amicable debate was in how to deal with difference of views between City staff and citizens.

Mangum said that he will make decisions by getting information from all sources, but if there are differences he’d like to bring both the citizen and staff together to iron out.

Cunningham promised to continue to be an advocate in Council. He gave the example of the Maderas Gulf Course, which he was willing to give them two more weeks to reach a decision.

Vineyard came up with an interesting proposed change to the Brown Act. What he’d like to see is not just the three minutes citizens have to speak to Council, but also the opportunity to have a back and forth with Council Members.

Vauss raised the issue of getting out into the community and holding town hall meetings.

Then the audience was allowed to ask a few questions. When asked about developing East Poway, none of the participants in the forum saw it a possibility. Also Prop FF would require a two thirds vote of the people.

When they were asked bout the traffic on Poway Road, they all agreed that there is a need to synchronize the lights. Cunningham said that the city is already studying the issue.

Disagreement came when they were asked about the mandated affordable housing.

Vaus said, “if it is mandated but not funded, it don’t happen.”

Mangum sees this as a private\public partnership. Also if it is not done the state can come in and build these houses and simply ignore the General Plan.

Vineyard said, simply, “I have no idea.”

When asked about improvements to emergency response, they all agreed that the City had the best Fire Department and  praised the Department’s responsiveness.

In closing, Mangum told the audience that he is a survivor of the Witch Creek fire, and that services on the Council would be a way to pay back the community that took care of him.

Cunningham said that the City has “a great track record.”

Vineyard stressed that he is for the community and invited people to the VFW Hall this Friday for the Police\FD appreciation dinner.