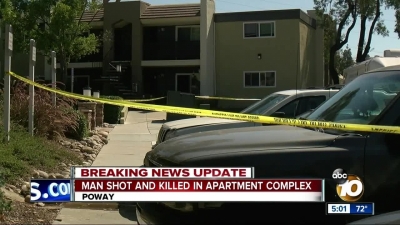 The Sheriff’s department received a call from Pomerado Hospital at 2:50 a.m. reporting a man with a gunshot wound in his abdomen.  The victim, Michael Walker, died at the hospital a short time after his wife drove him there, ECM news partner 10 News reports.

Detectives went to his apartment at 13409 Midland Road in Poway, where the investigation found that a bullet had entered Walker’s residence from a nearby apartment, according to Lieutenant Chad Boudreau.

“Three people from that apartment were questioned by homicide detectives.  Manuula Save was arrested for murder,” Boudreau says.

A neighbor, Christine Zobel, told 10 News that she heard an altercation shortly before hearing gunfire.

"That could've gone through the floor and into my kids' room, or anybody around us could've been affected from this reckless event," Zobel said.

Search warrants have been obtained and the investigation is ongoing.