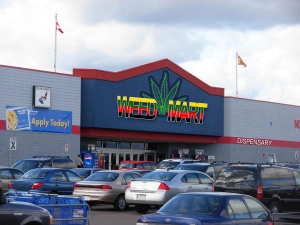 Only one dispensary will be permitted to open for the time being, a large medical cannabis “superstore” to be built next to the existing Wal-Mart on Midland Road.

According to Poway mayor Don Higginson, the decision to reverse course was a matter of fairness.  He explained that “[members of the city council] felt that, having approved the conversion of the city’s Wal-Mart into a superstore last year, we could not morally justify failing to allow another giant chain store to come in and compete against local merchants.”

The dispensary will be a branch of the Weed-Mart Corporation, the national chain of medical marijuana superstores that has over 400 locations nationwide, most of them in Marin County.  Obtaining the marijuana will require a prescription.

According to a Weed-Mart spokesman, an on-site doctor will be available at the Poway location to facilitate these transactions.  The doctor, who goes by the name of Eddy, will operate out of the parking lot every evening, except on Tuesdays when he has a class.  The Poway Weed-Mart will also sell groceries, mainly candy bars and salty snacks.

Supporters of the Weed-Mart idea expressed satisfaction at the city council’s decision.

“Dude, I’m totally stoked to see this gnarly new store,” said Jack Stupor, a longtime proponent of increasing public access to cannabis.  “It is high time all of my friends have something to treat their glaucoma with.  The oregano we’ve been using barely helps at all.  Plus it is, like, impossible to roll properly.”

The Weed-Mart spokesman told East County Magazine that the new store will create many Poway jobs and will be a responsible and friendly retailer.  The superstore will be open 24 hours in order to meet the needs of all its patients, in particular Grossmont College students who may need to refill their prescriptions late on a Saturday night.  He added that the new store will have many openings for clerks, cashiers, driers, and people who really know how to lay the fertilizer on thick.

“So come on by after we open and inhale the ambience as our laid-back, giggling greeters welcome you,” the spokesman urged.  “And, try our happy hour.  It’ll have free munchies.”

Poway farmers are already making plans to become suppliers to their local Weed-Mart.  “This will be a great opportunity for me to expand … I mean, start my own rooftop cannabis garden,” said one local grower, who asked not to be identified.

Opponents of the Weed-Mart also were quick to react to the city council’s move.

“I am outraged at this decision,” said protestor Lace Straight, who was picketing outside of the Council chambers.  “This is just another sleazy deal, cooked up in a smoke-filled room by special interests.  I am hopping mad.”

Another protestor, who also did not want to be identified by name, expressed concern over the Weed-Mart’s potential impact on local entrepreneurs.   “This is going to be really bad for business for my cousin, Drew,” he said.  “He may have to go back to being a pharmaceutical sales rep.”

The CEO of Weed-Mart was not available for comment on the controversy.