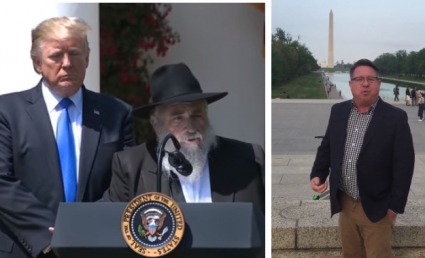 After meeting for 25 minutes with Rabbi Goldstein, the President asked the Rabbi to speak, praising him for his courage during the shooting at the Chabad of Poway synagogue. View video.

Mayor Wells received an invitation to attend after Trump reportedly read an article by Wells titled “How Donald Trump is the Christian Hero We Never Expected,” published in Charisma News.

Rabbi Goldstein was lauded by Pres. Trump as a “great man” whose “Grace and courage and devotion touches every heart and soul in America.”

The Rabbi said of the shooter, “I faced evil and the worst darkness of all time right in our house of worship…I faced him and I had to make a decision. Do I run and hide or do I stand tall and fight and protect all those that are there?  We cannot control what others do, but we can control how we react. The way we react to darkens is with light.”

He said he made the decision to save as many lives as possible, regardless of the consequences. He is credited with leading children to safety during the shooting. “My fingers got blown off, but I did not stop,” he said, adding that “as a Jew, you are a soldier of God. You need to stand fall and stnd fast, and do whatever it takes to change the world.”

He said the shooting has changed his life forever, inspiring him to “help others learn how to be strong, how to be mighty and tall.”

He also praised Lori Kaye, whom witnesses said sacrificed her life to save the Rabbi, recalling her as a “blessed memory, a 60 year old dear friend of our congregation.”  He announced that on June 2nd, a march will be held in her memory “to show that nothing will stop us.”

This year’s prayer day theme was “Love One Another.”

After violence resulted in death of woman protester at a white Supremacist rally in Charlottesville, Virginia led by torch-carrying neo-Nazis in Swastikas in 2017, Trump drew criticism for claiming there were “very fine people on both sides” and not forcefully denouncing hate groups.

But at the National Day of Prayer, which also fell on Holocaust Remembrance Day, Trump marked the occasion by delivering a powerful denunciation of hate crimes targeting places of worship of all faiths.  “As we unite on this day of prayer, we renew our resolve to protect communities of faith and to assure that all people, all ofour people, can live and pray and worship in peace. In recent months that’s been pretty tough. We’ve seen evil and hate-filled attacks on religious communities in the United States and all around the world,” the President said.

Trump continued, “One month ago, three historically black churches were burned tragically in Louisiana.  In Sri Lanka and New Zealand, hundreds of Christians and Muslims were brutally murdered at their places of worship.” He also cited the October attack on the Tree of Life Synagogue in Pittsburgh and the shooting of Jewish people at the Chabad of Poway synagogue in Poway on the last day of Passover.

“We will fight with all our strength and everything that we have in our bodies to defeat anti-Semitism, to end the attacks on Jewish people, and to conquer all forms of persecution, intolerance and hate,” the President concluded.  “Every citizen has the absolute right to live according to the teachings of their faith and the convictions of their heart. This is the bedrock of American life.” 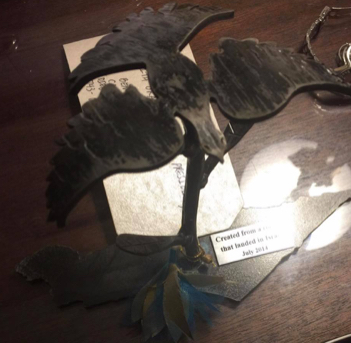 Mayor Wells brought the President a statue of a dove made from pieces of a rocket launched at Israel, along with a letter from members of the San Diego Jewish community voicing appreciation to Trump.  “I am happy to say that the Secret Service, after a fair amount of scrutiny, accepted them both and were willing to give them to the President,” Wells posted on Facebook.

Wells missed the local East County Mayors Prayer luncheon to attend the National Day of Prayer. Councilman Steve Goble filled in for Wells. Also in attendance for the first time was Poway Mayor Steve Vaus, who said community members prayers were heard after the tragic shooting at Chabad of Poway, the San Diego Union-Tribune reported.

“Our lives in Poway changed five days ago when hate and heartbreak came through the door,” said Vaus, who is running for Supervisor and has been endorsed by Supervisor Dianne Jacob. “You can’t control when that happens but you can control how you respond to it... There’s only one way you can get a shadow, that’s with the light on the other side. God is that light. We put our arms around each other and walked through that valley of the shadow of death and walked toward that light. That’s Poway.”

In Washington D.C., President Trump concluded, “As God promises in the Bible, those who hope in the Lord will renew their strength; they will soar on the wings like eagles. They will run and not grow weary, and they will walk and not be faint.”

That Donald Trump sees "the light"?