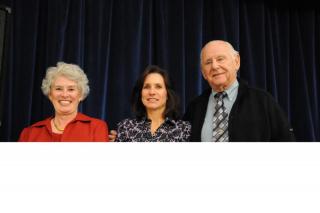 October 25, 2012 (Poway)-- Andy Patapow, Kimberly Beatty and Linda Vanderveen met in a spirited debate over the policies and procedures at the Poway Unified School District (PUSD). Both Patapow and Vanderveen are standing for reelection, while Beatty is running an outsider campaign.

From bonds to busing to ballot propositions, audience members learned where candidates stood in the forum co-sponsored by Poway Chamber of Commerce and the Green Valley Association.

Vanderveen was appointed to the PUSD 14 years ago and has been serving on the Board ever since. Before her appointment she served in the PTA and other organizations.

Patapow has been in education for 32 years, and has been a member of the Board for 16. He is also a retired Principal from Abraxas High School.

Beatty is a concerned parent, as well as a school volunteer for twelve years.

While the three of them agree that there are challenges ahead and headwinds, they disagree on the priorities for the district.

Beatty was quick to point out that school funds “have been raided by cities that have used those moneys to build projects without raising taxes.”

It is worth nothing that both Vanderveen and Patapow were members of the PUSD when Prop C, to fund school renovations, came into effect. While Prop C  was passed by the voters according to Will Carless of the Voice of San Diego, it will cost the PUSD $1 Billion when all is said and done in 40 years or so.

When asked about Prop C, Patapow said that they worked with “the information we had at hand.” He added that they followed the mandate of the voters, and that “we thought we had the best policy for students and building programs.”

He added that a young student, who was taking an exam, sent an email to him, where he wrote, “I don’t see anything wrong with me paying for bonds when I come of age.”

Beatty said that this whole thing distresses and upsets her. “It is not a smart deal,” she said. She believes there should be a way to reassess this and she is not too impressed with new buildings. She believes that that even after passage the bond can be reassessed, and this could lead to “$500 million or more saved over the long haul.”

Vanderveen said that people are looking at the issue of Prop C “with the clarity of hindsight.” It’s a fact that 24 schools have been rebuilt. Now “every single student has access to good facilities, 21st century schools.” He emphasized that the Board has not created a district of haves and have nots.

When asked about substance abuse in the district, none tried to hide it. It exists. Beatty said that it was interesting that this was the Red Ribbon week when kids pledged not to use substances. After middle school this no longer works and peer pressure becomes more important. “We need to change the paradigm,” Beatty said.

Patapow said that he has received the Red Ribbon award. He highlighted that he is on a board dealing with these issues with the Pomerado Health District. In his mind, “Education is the key.”

Vanderveen said that “any drug abuse is significant to that child.” She supports student support services and programs to deal with drug abuse. Moreover, the zero tolerance at the school actually has a deterrent effect, she feels.

How the PUSD deals with underperforming schools led to some interesting answers. According to Vanderveen, the teachers themselves have dealt with this by implementing the Poway Professional Assistance Program (PPAP), which assigns a mentor to a new teacher for the first two years of service. It allows new teachers to learn from experienced ones, and to weed out under-performing instructors before they reach tenure. It was seen as such a good model that the Legislature looked at it for a state wide model.

Beatty pointed out that due to cost this program died in the Legislature. She also was critical of retention rates, where 30% of teachers leave within the first two years and 50% within five. In her mind we need to attract the best of the best. She also mentioned that at the UCLA orientation this year, teaching was no longer among the first ten professions College freshmen were looking into.

Patapow essentially agreed, and emphasized that the Union was instrumental in getting this process under way. He added that only the top teachers apply to the Poway District and that they still attract only the cream of the crop.

How to improve collaboration between the chamber and the PUSD came next.

Patapow said that business should adopt schools. Also that internships could be beneficial to both sides. This way teachers can bring this real world knowledge back to the classroom and help their students make choices based in the real world.

According to Vanderveen, the Chamber is a go between and a “partner in education.” Chamber members can help teach students about the business world by giving internships, while picking their brains on social media. It can also help businesses understand the ‘tween world as a potential market. Moreover, providing field trips and speakers can broaden a students experience.

For Beatty the matter is similar. Internships would be good. She also wants businesses to come into the campuses and explore what it is being done in the schools, such as advanced robotics, science Olympiads and career days.

Meeting the needs of the school district led to Beatty’s point that “we need more teachers and staff. Library hours have been cut as well as support staff.” She compared this to Rancho Bernardo. While PUSD schools have class sizes of upwards of 40 kids, Rancho Bernardo has 15. She also once again pointed out that tax distribution is a problem. The schools used to receive over half of the property taxes, but not any longer. She wants to return to priorities. We need a “dedicated revenue stream,” she added.

Patapow thanked the strongest school volunteer program in the state. The community is very involved; the PUSD has the strongest PTA and other school districts are envious, he said.

Vanderveen emphasized that the building renewal will help the district for decades to come. Also using better materials will save money in the long haul in maintenance cost. She also raised the issue that schools are changing and with technology, distant learning is becoming more common.

The audience asked about Prop 30. This statewide ballot proposition will raise sales taxes to 7.5% in the state as well as raise income tax on top earners. Its fiscal effects are as follows:

“Additional state tax revenues of about $6 billion annually from 2012–13 through 2016–17. Smaller amounts of additional revenue would be available in 2011–12, 2017–18, and 2018–19. These additional revenues would be available to fund programs in the state budget Spending reductions of about $6 billion in 2012–13, mainly to education programs, would not take effect,” according to Ballotpedia.

According to Patapow “They put us in a bind. Even if it passes it cuts $6-9 million.”

He was critical of Prop 38, which would funnel funds directly to the schools, and not the district.

Nevertheless  not passing these propositions will have a negative effect on the district.

Vanderveen said that she was up in Sacramento and “there is no plan B.” If 30 doesn’t pass, there will be trigger cuts, and next year “all bets are off.” In her opinion some districts will go bankrupt, though she said that she does not expect thigns to get this drastic for the PUSD.

Beatty agreed with the other two on the panel. if 30 does not pass, according to Beatty, there will be a $416 loss per pupil.

Finally they were asked how to keep the busing program sustainable.

The three agreed that it is an asset to the school. Both Vanderveen and Patapow agreed that the staff is to be credited for maintaining a high level of chiefly safe service. The drivers make a good effort to keep it going. Beatty said that she fought to keep the service going for programs such as Band and field trips.

Patapow also said that Special Ed buses are supposed to be funded by the State, but he does not expect to see the $12-16 million that the State is behind on in payments.

In a closing statement, Beatty said that schools made a disservice to just emphasize the high test scores. She promised transparency and accountability.

Patapow said that the testing scores come with good practices. He reminded the audience that he has been on the job for 15 years and has been through changes in administration and a lowering of the top down management.

Vanderveen emphasized her experience over 29 years. She emphssized that in these uncertain times, “We need stability on the Board.”