Sutton had been writing down dance movements using stick figures since she was a young girl. While teaching dance writing at the Royal Danish Ballet Company in Copenhagen, Denmark, she was asked by a university representative to create a written version of a video. She did so, using Danish sign language. “Then she came back here and started learning ASL,” said Romero, adding, “Structure and signs are different everywhere.” 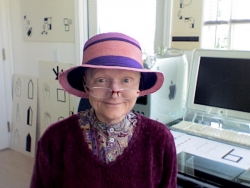 Romero, who is not deaf, found her new calling after suffering an injury that ended her dance career. “When I got hurt, I wanted to keep moving,” she recalled. “Sign language is so beautiful, so I learned it. It took two years.”

holic, Romero now attends the Marantha Chapel, which means “The Lord Cometh” in Aramaic. “I was the lead interpreter for the deaf there,” said the Poway resident, who was also the founding editor of “The Sign Writer Newspaper” which featured articles in ASL translated into English. “The issues were completed entirely by hand and published by the Center for Sign Writing. Copies were sent to people in 40 countries!”

Writing down The Gospel According to John in written signs took two years, with another two years of editing and layout by ASL editor Lucinda O’Grady Batch. The translation is based on the New Living version of the Bible, published by Tyndale Publishing.

“This was presented at the Vatican last November,” Romero said with pride. Copies of the book may be obtained at http://www.signwriting.org/library/bible/ for a donation.

d into a thriving online community that now includes links to order sign-writing software, products such as mouse pads, greeting cards and coffee cups with messages in written sign language, and sign-written books including world literature, encyclopedias, dictionaries, children’s books, and textbooks. There is a sign writing blog and a map of more than 40 countries that now have written sign languages.

Romero’s gospel translation has inspired a Maltese sign language version. “There are actually 400 deaf people on that island,” she said. The dancer-turned-translator also receives weekly requests from a deaf church in Michigan to translate the weekly sermon. “They put it overhead and people in the congregation have pages or laptops, following along.”

What’s next for Romero?

“I’ve already completed the Gospel of Matthew and the Book of Romans,” she disclosed. “Tyndale has given us permission to translate the entire New Testament, so I’ll be busy.”