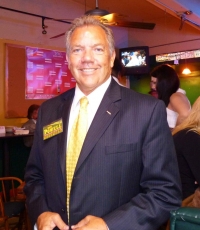 By Miriam Raftery and Richard Darvas

June 9, 2010 (San Diego's East County) - Col. Rick Powell, a retired military officer and Green Beret with an extensive career in law enforcement as well as military service, has defeated Emma Turner, president of the La Mesa-Spring Valley School Board, to win the Republican primary in the 78th Assembly District.

Powell will face off in November against Assemblyman Marty Block, who ran unopposed in the Democratic primary.

With 50% of precincts counted, Powell has a commanding 58.05% of the vote, while Turner has 41.95%, still a strong showing for a first-time candidate for state office.  Turner had run on a platform with improving public education as her central plank. Powell's principal goals are to promote business and job growth and reduce wasteful spending.

"We ran an effective, well-rounded campaign.  This is my first campaign, and it's exciting seenig this come to fruition," Powell told East County Magazine.  He added that he plans to reach out to Turner to consult on education issues.