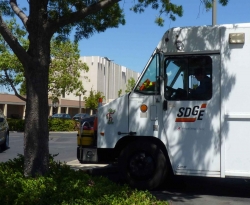 July 25, 2012 (La Mesa) – Patients, some in walkers and wheelchairs, were dismayed to learn that a power outage has forced evacuation of the five-story medical office building #3 at 5565 Grossmont Center Drive.

A spokesperson at the property management company told ECM that power may not be restored until after 5 p.m. tonight.

Power was also out briefly at buildings #1 and #2, but has been restored. The outage was first reported by Incident Page Network, confirmed by ECM at the scene.

According to Erin Koch, SDG&E spokesperson, three customers are experiencing a power outage in La Mesa. SDG&E is working to restore power.  The cause is still under investigation, but the problem seems to be with an underground cable, she advised ECM.

News of the building closure was met with dismay by patients, as a guard informed them that he did not know when the power would be restored.

The outage is the latest in a serious of problems with underground electric lines in La Mesa, which has suffered several unplanned outages recently with planned outages planned for July 28 and again on August 4 in some La Mesa neighborhoods.  For details on the upcoming outages, see http://www.eastcountymagazine.org/node/10505