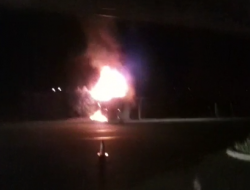 Heartland Fire & Rescue responded, along with El Cajon Police and SDG&E. Power was later restored. Traffic was not affected, since signal lights continued to function.