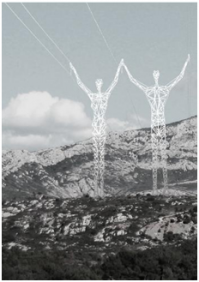 September 27, 2015 (San Diego’s East County) – What if power line towers and wind turbines could be designed to resemble sculptures?  Such efforts are on the horizon, thanks to several innovative designers. 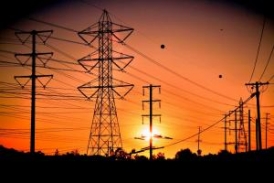 Undergrounding lines is costly.   But now some designers are working to come up with power tower designs that are either less intrusive, with slimmer profiles, or in some cases making artistic statements on their own.

Case in point: the architectural firm Choi+Shine has designed”Land of Giants™” towers to resemble giant humans in a variety of poses 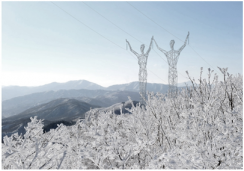 – bringing a sculptural quality to typically utilitarian electric towers. James Wellnutt at Choi+Shine advises, The Giants are scheduled to be built in Iceland in 2017.”  (photo, left, © Choi+Shine)

He adds, “The Giants have received overwhelmingly positive support from the public” even though “no one likes new lines.  The clearest example of how welcome the Giants are comes from Norway, where the Mayor of Forsand stated at a public hearing that he would oppose a newly planned line passing through his district, unless they included the Giants.” 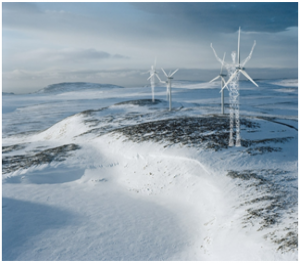 The firm has also created a “Giants of the Wind”, a series featuring sculptural wind turbines (photo,right © Choi+Shine))

The Land of Giants won “Recognition Award” at the Icelandinc High Voltage Electrical Pylon International Design Competition in 2008 and won Unbilt Design Award from the Boston Society of Architects in 2010.  They have been featured in major media around the world including the BBC and CNN news as well as design and fashion publications, also serving as symbolic structures at the Tollwood Winter festival 2012 in Munich, Germany and the European Capital ofCulture Metamorphoses, Marseille-Provence in France in 2013. 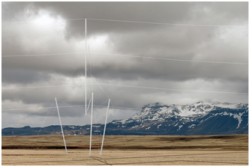 he company has other designs, too, such as a a slimmer-line “Mantis” tower design (photo, left © Choi+Shine)

You can view more examples at http://choishine.com or at their Land of Giants™ wepage at http://www.choishine.com/Projects/giants.html

Another design firm, Design Depot in Russia, has crafted power towers to resemble wildlife such as bears or deer that appear 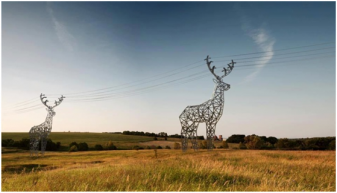 to arise out of the natural landscape, (photo, right).

How much different might East County look if SDG&E had opted for, say, sculptural latticework eagles, deer, coyotes or mountain lions instead of bulky and  unsightly towers? With future power lines potentially in the pipeline, artistic towers might be options to mitigate blight. 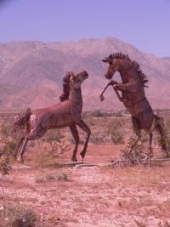 he deer-style towers are evocative of the over-sized metal sculptures by artist Ricardo Breceda; his sculptural creatures ranging from horses to dinosaurs havebecome tourist draws in the Anza-Borrego Desert in Southern California. (photo, left, by Miriam Raftery)

While power lines have long been viewed as visual blight, a concern not likely to vanish, adding creativity to the mix can bring elements of beauty, whimsy and an artistic statement to power projects in the future—a change that could lessen the negative impact on communities designated to become energy corridors.