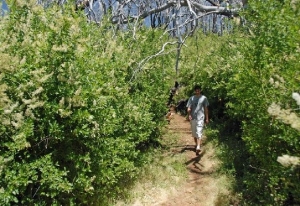 February 7, 2015 (San Diego's East County) - Cleveland National Forest is slated to continue prescribed burning from now through June of 2015, depending upon weather and fuel conditions. But at least one environmental organization has raised questions about impacts of the burns.

The Descanso Ranger District is treating some 500-700 acres near the communities of Mount Laguna, Alpine, and Pine Valley.

The prescribed burn on Mount Laguna will be conducted along the old Wooded Hill Road, north of Sunrise Highway and west of the town of Mount Laguna.

For more information  on these fires you can contact Descanso Battalion Chief Rick Marinelli at 619-445-6235.

Planting of native trees is also set to begin on Middle Peak in the next few weeks, Kerry Hunsinger with the State Park Service told East County Magazine.  “The Cedar fire burned so hot it destroyed the seeds of natives,” he added.

The stated reason for the burns is to reduce fuel load and thus lower the risk of a catastrophic wildfire.

However the burning has drawn some criticism. Richard Halsley at the California Chaparral Institute has published an article which contends that the Park Service is removing chaparral such as ceonothus that provides habitat for wildlife.

“Millions in dollars in grants from corporations are funding the clearcut/tree planting project for "carbon sequestration" (i.e. planting trees to remove carbon from the atmosphere). Ironically, the grinding and burning of the recovering chaparral and the trees killed in the fire will release a significant amount of carbon. Reportedly, another 2,500 acres of ceanothus removal is planned,” writes Halsey, who adds that State Parks has also filed for an exemption from environmental review.