However Cal Fire Public Information Officer Issac Sanchez told East County Magazine that a Julian Times post on Facebook claiming that Cal Fire appeared to have “lost control” of the controlled burn was “absolutely” inaccurate.  Last night, Sanchez said 126 acres had burned, out of a 140-acre plot scheduled for burning. There was “zero escape from the containment lines, per the incident commander,” he told ECM’s editor  last night. 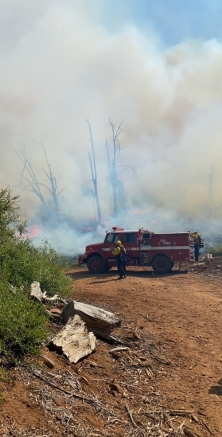 Early in the evening, Cal Fire posted on Twitter, “Firefighters have completed the prescribed burn in the area of Cuyamaca Rancho State Park. Additional resources were requested to ensure mop-up and at no point did the fire escape containment lines. Resources to remain on scene into the evening. (Photo, right, courtesy of Cal Fire)

Firefighters remained on scene through the night.  Video provided courtesy of BackCountrySanDiego.com shows dramatic images of flames against the night sky.

The burn was part of a “forest health and recovery program” according to the U.S. Forest Service, which sent a press release earlier this month advising of the prescribed burn aimed at reducing hazardous fuel load, vegetation management, reforestation, watershed and wildlife habitat improvement, according to the release.

The burn was coordinated with the San Diego Air Pollution Control District to “minimize smoke impacts in surrounding communities.” The advisory indicated people may see or smell smoke from 9 a.m. to 6 p.m.  Residents were urged to avoid strenuous outdoor activity and remain indoors as much as possibly during the burn, particularly for children, the elderly and people with respiratory and heart conditions.

Cal Fire and State Parks indicated they adhered to safety protocols set by public health officials including accommodations to limit exposure among first responders and field crews to protect them from COVID-19.