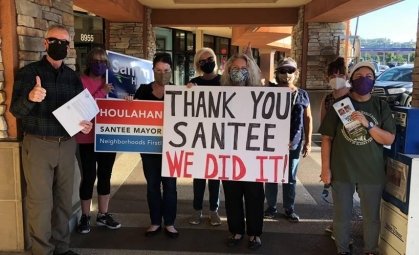 By Mike Allen
Photos courtesy of Van Collinsworth, Preserve Wild Santee
Photo:  Van Collinsworth,  Preserve Wild Santee, left, gives a thumbs up to supporters of the signature gathering drive
October 30, 2020 (Santee) -- The campaign to allow Santee voters to weigh in on the Fanita Ranch project turned in 6,300 signatures to the Santee City Clerk’s office Oct. 29, nearly double the minimum number required to force the City Council to either rescind its approval or put the issue to a public vote.

Preserve Wild Santee, the nonprofit environmental political action committee that launched the campaign soon after the Santee City Council approved the housing project last month, said it decided to deliver the signatures before the Nov. 4 deadline because of the large cushion the group collected and to avoid the possible spread of Covid-19.

“Thanks to the overwhelming response by Santee residents, we are able to submit the petition early,” said Councilman Stephen Houlahan, who is running for Santee mayor, and cast the lone no vote against Fanita Ranch on Sept. 24. 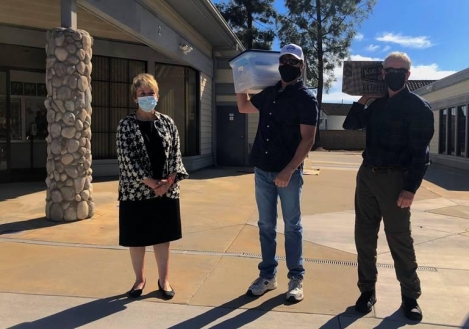 Photo, right:  Santee Council candidate Samm Hurst joins in delivery of petitions to City Hall.
Van Collinsworth, Preserve Wild Santee’s director, said once the county Registrar of Voters validates that the minimum number of signatures were met, the City Council will vote to either rescind or place the issue on the ballot. It would be up to the council to determine when the vote happens.
City Clerk Annette Ortiz said the validation process could be completed in December. The next general election is 2022, but the council could authorize a special election.
Collinsworth said in a release announcing the successful campaign that residents responded to the problems the project would bring. “Fanita Ranch would place over 8,000 new residents in a severe fire hazard zone and add over 26,000 vehicle trips per day to congested roads complicating emergency evacuations and commutes.”
Proponents of Fanita Ranch mounted a counter offensive to the petition signature gathering, hiring many people to hand out flyers and tell potential signers the benefits that the project would provide, including making improvements to Highway 52, a new fire station, and millions of tax dollars to the city and school district. Developer HomeFed Corp. bankrolled the campaign by $300,000.

Photo, left:  in addition to the referendum, opponents of Fanita Ranch are also urging a yes vote on Measure N, which would give Santee residents a vote on all future projects larger than the General Plan allows.
Despite numerous complaints by PWS about harassment of signature gatherers, some of which were made to the Sheriff’s Department, the group collected far more signatures than they anticipated. Collinsworth said about a third of the total were collected by paid gatherers, and volunteers accounted for the great majority, about 4,300.
At the Oct. 28 Santee Council meeting, proponents of the 3,000 unit residential project said PWS gatherers were violating rules and lying to people that the petition would stop Fanita Ranch, which it doesn’t.
“Their tactics in seeking signatures to repeal Fanita Ranch seem to be almost fraudulent. They lie, they intimidate people and they are constantly calling the police,” said Justin Schlaefli, who has been outspoken in his support of the project.
Signature volunteer Sharon Guerrero recounted a recent incident in which she was talking with a woman in her car  about the petition, and was soon surrounded by three to five people, who she said were hired by HomeFed. The people effectively prevented her from communicating with the prospective signer and unnerved her, causing her to drive away, Guerrero said.
“There’s no reason why HomeFed blockers should be following us into store locations, or interfering in our democratic process in any way. They have a right to free speech, but they should not be preventing residents of Santee from having that same right.”
As one of the most contentious Santee elections nears the finish line on Nov. 3, the recent signature gathering effort dovetails with an ongoing campaign to stop all manner of new development that do not conform to the city’s General Plan. Measure N on the local ballot seeks a yes vote to require those projects that aren’t in conformance with the plan to trigger a vote.
The election also pits Houlahan against Mayor John Minto, who supported Fanita Ranch and accepted contributions from multiple development entities. In District 4, challengers Dustin Trotter also accepted development money, while Samm Hurst has vowed not to take such contributions.
Fanita Ranch has been through multiple iterations since first being proposed in the 1980s, and has triggered staunch opposition from environmental groups and other citizens who say the city already has enough housing. But Santee elected officials say the 2,600 acres in the northeast section of the city has always been planned for new housing, which is badly needed more than ever.
HomeFed, which acquired the land in a bankruptcy auction for about $13 million in 2011, proposed a different type of project than many recent developments, keeping about three-quarters of the land as open space and parks. The company also did considerable outreach, and discovered the main sticking point for many residents was the expected increased traffic congestion on SR 52 and local streets.
To address that, HomeFed pledged to make significant improvements to Highway 52, and have those completed before any new owners moved in. It also included in its plan such features as a new fire station, a working farm, parks, and a solar farm intended to make the project carbon neutral.
But opponents of Fanita Ranch say the project shouldn’t go ahead because there should be no development at all given the high fire zone the land is located in, inadequate mitigation measures for the destruction of native plants and wildlife, as well as inadequate evacuation routes available during emergencies.
Jeff O’Connor, senior vice president of HomeFed, said the company intends to continue to move forward with the plan, obtaining the necessary grading and other permits, despite what seems to be a certain vote on the project.
“If they got 6,000 qualified signatures then there will be a public vote and in the meantime Santee residents will have to wait for things like adding lanes on the 52 and building a brand new, desperately needed fire station,” he said.