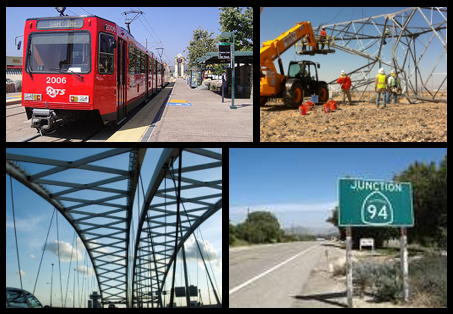 The infrastructure portion of the $2 trillion plan includes money for repairing roads and highways, as well as improving access to clean drinking water, upgrading electric grids, and providing high-speed broadband for all Americans. Biden’s plan also includes updating millions of homes, school buildings, childcare facilities and federal buildings, with a focus on those that serve veterans.

“This is about opening opportunities for everybody else. And here’s the truth: We all will do better when we all do well. It’s time to build our economy from the bottom up and from the middle out, not the top down,” President Biden said while speaking at a training facility in Pittsburgh, PA.

“President Biden’s American Jobs Plan is an important first step toward the long-term infrastructure and economic investments we need to make. After more than a year spent mired in this pandemic, it is clear that a return to the way things were done before won’t be sufficient,” Congresswoman Sara Jacobs (D-CA-53) said in a press release.

The Fact Sheet posted by the White House states, “The President’s plan includes $20 billion for a new program that will reconnect neighborhoods cut off by historic investments and ensure new projects increase opportunity, advance racial equity and environmental justice, and promote affordable access. The President’s plan will inspire basic research, like advanced pavements that recycle carbon dioxide, and “future proof” investments that will last decades to leave coming generations with a safe, equitable, and sustainable transportation system.”

Mayor Todd Gloria expressed support for the bill on Twitter, stating, “I’m thrilled with the #AmericanJobsPlan, which includes $213 billion to build more than two million affordable homes to help our community.”

The president's infrastructure plan would invest heavily in public transit and intercity rail — goals that are closely aligned with what San Diego transportation planners hope to achieve, KPBS reports.

The second part of Biden’s plan is the American Families Act, which President Biden has said he will discuss in the coming weeks. The second goal of the American Jobs Plan is aimed at promoting and creating new opportunities for Americans in the workforce. 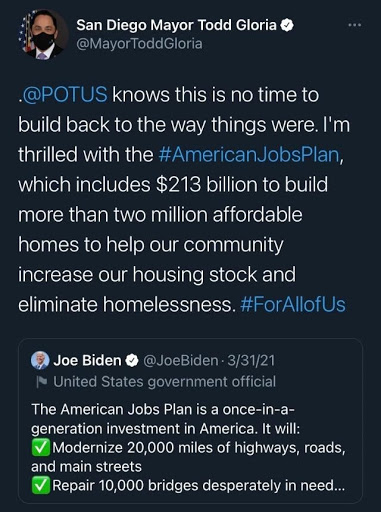 "In fact, it’s the largest American job investment since World War II.  It will create millions of jobs, good-paying jobs.  It will grow the economy, make us more competitive around the world, promote our national security interests, and put us in a position to win the global competition with China in the upcoming years,” Biden said.

To boost revenues to fund these new programs, the Made in America Tax Plan target sinequities from the 2017 tax laws passed by Trump. It includes setting the corporate tax rate at 28%, reducing loopholes and increasing enforcement against corporations that attempt to avoid or evade certain taxes.

The President placed heavy emphasis on the fact that families making under $400,000 dollars a year will not see an increase in their federal taxes, and will not support suggestions to the plan that will change that.

“I start with one rule: No one — let me say it again — no one making under $400,000 will see their federal taxes go up.  Period,” Biden said, adding, “These are my ideas on how to pay for this plan.  If others have additional ideas, let them come forward.  I’m open to other ideas, so long as they do not impose any tax increase on people making less than $400,000.”

Biden also stated that infrastructure has historically been a bipartisan issue;previous Republican presidents have tackled problems with America’s infrastructure, such as President Eisenhower creating the Interstate Highway System.

“I don’t think you’ll find a Republican today in the House or Senate — maybe I’m wrong, gentlemen — who doesn’t think we have to improve our infrastructure,” Biden said. “They know China and other countries are eating our lunch.  So there’s no reason why it can’t be bipartisan again. The divisions of the moment shouldn’t stop us from doing the right thing for the future.”

Both chambers of Congress must vote on this plan before it can go into effect. While the bill will likely easily win passage in the Democratic-controlled House of Representatives, it could face tougher prospects in the closely divided Senate.