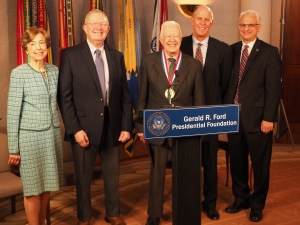 “Looking at the current toxic times and reflecting back to President Carter’s and Dad’s times in office, through their examples we can learn how politics should be conducted.  They illustrated to the nation that politics can be handled with dignity, class and respect. My family and I are grateful for President Carter’s public service and how he has conducted himself throughout his life. We are proud to call the Carter family friends.” -- Steven Ford, son of President Ford.

June 5, 2017  (Washington D.C.) – Former U.S. President Jimmy Carter was honored with the Gerald R. Ford Medal for Distinguished Public Service on June 5, 2017 at the Capitol Hill Club in Washington D.C. The medal was presented to Carter via a video presentation from Atlanta, Georgia, during the Gerald R. Ford Presidential Foundation’s annual reception and dinner. Journalists Gregory Korte, USA Today; David Martin and Mary Walsh, CBS News; and David Cloud, Los Angeles Times, were each honored as recipients of the Gerald R. Ford Journalism Prize for Distinguished Reporting during the event.

“As I reflect back on more than 25 different projects that Jerry and I collaborated and shared leadership, I can’t help but be grateful for the mutual respect and the intense personal friendship that developed during that time together,” said Carter through a video message that was recorded earlier at the Carter Center in Atlanta, Georgia, and played during the dinner. “The words I spoke about my dear friend both at my inauguration and his funeral still ring true today. ‘For myself and for our nation I thank my predecessor for all he did to heal our land.’  I am thrilled to receive the Gerald R. Ford Medal for Distinguished Public Service and I’m prouder still of the lasting friendship we still have with the Ford Family.”

Carter was sworn in as the 39th President of the United States on January 20, 1977. During his time in office, he spearheaded significant foreign policy accomplishments, including the Panama Canal Treaties, the Camp David Accords, the peace treaty between Egypt and Israel, the SALT II treaty with the Soviet Union, and the establishment of formal diplomatic relations with China.  He is credited for championing human rights throughout the world. His leadership resulted in substantial domestic achievements, including a comprehensive energy program and the creation of the Department of Energy.

Before being elected president, Carter served two terms in the Georgia State Senate and was sworn in as that state’s 76th governor in 1971. During his inaugural speech as governor he declared that “the time of racial segregation is over.” He said, “No poor, rural, weak, or black person should ever have to bear the additional burden of being deprived of the opportunity for an education, a job or simple justice.”  Civil rights has remained a core priority for Carter.

“Looking at the current toxic times and reflecting back to President Carter’s and Dad’s times in office, through their examples we can learn how politics should be conducted,” said Steven Ford, son of President Ford. “They illustrated to the nation that politics can be handled with dignity, class and respect. My family and I are grateful for President Carter’s public service and how he has conducted himself throughout his life. We are proud to call the Carter family friends.”

Receiving the Gerald R. Ford Journalism Prize for Distinguished Reporting on the Presidency in 2016, Korte was recognized for a series of reports that appeared in USA Today about the use of the President's pardon power, the increased utilization of lower-risk sentence commutation, and its unintended consequences. He also generated unique reports examining diverse White House practices, ranging from signing ceremonies to flag-lowering procedures for government buildings.

Martin and Walsh received the Gerald R. Ford Journalism Prize for Distinguished Reporting on National Defense in 2016 for their report “The New Cold War.” The CBS News story explained why the nation’s nuclear missions remain critical by tying it to changes in Russia’s aggressiveness on land and an increase in the size and frequency of Russia’s nuclear strategy, which includes changes to Russian military doctrine approving the use of smaller tactical weapons.

The Gerald R. Ford Presidential Foundation fosters increased awareness of the life, career, values, and legacy of America’s 38th President.  It does so through activities designed to promote the high ideals of integrity, honesty, and candor that defined President Ford’s extraordinary career of public service. The Foundation promotes the ideas, values, commitment to public service and historical legacy of President Gerald R. Ford and further promotes greater civic engagement and recognition of integrity wherever it exists in the public arena.  It supports permanent and changing exhibits designed to promote historical literacy; conferences; educational outreach and other programs, both scholarly and popular, including at the Gerald R. Ford Presidential Library and Museum.

Not everyone agrees that Ford was necessarily exemplary of dignity, class and respect in his pardon of "I'm not a crook" Nixon. In fact, Ford's action in pardoning Nixon was nothing if not predictable as no president has ever been exposed to anything but 'modified justice'. Most of our presidents were prime candidates for prison for their treatment of the Constitution and that includes both of the major parties. In pardoning Nixon, Ford insured that this special treatment of presidents will be ongoing and is hardly in keeping with "dignity, class and respect". I call it more akin to cowardice. How much courage does it take to follow the law? Why does the public believe that there's a many-tiered system of justice, that favors the crooks in high places?