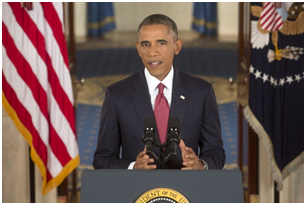 Obama also announced increased support for groups fighting ISIL on the ground, including 475 additional U.S. military personnel, training, intelligence and equipment; These groups include Kurdish and Iraqi fighters as well as Sunnis willing to combat ISIL, which has slaughtered more Muslims than religious minorities. The President said  that in Syria, the strategy will be to support opposition to ISIL extremists. He made clear that “In the fight against ISIL, we cannot rely on an Assad regime that terrorizes its own people -- a regime that will never regain the legitimacy it has lost.”

Third, the President aims to work with international partners on efforts that will include cutting off ISIL’s funding, strengthening intelligence and defenses, countering ISIL’s ideology and stemming the flow of foreign fighters into and out of the Middle East.  In two weeks, President Obama will chair a meeting of the U.N. Security Council to further mobilize the international community, he revealed.

The fourth component of the plan is humanitarian aid for those displaced from their homes by ISIL. This includes Sunni and Shia Muslims who are at grave risk, as well as tens of thousands of Christians and other religious minorities.

“We cannot allow these communities to be driven from their ancient homelands,” the President said, noting that already, allies are flying planes with the U.S. over Iraq, sending arms and assistance to Iraqi security forces and Syrian opposition, also sharing intelligence and providing billions of dollars in humanitarian aid.

“Secretary Kerry was in Iraq today meeting with the new government and supporting their efforts to promote unity,” the President said, adding that Kerry will next travel across the Middle East and Europe to enlist more partners, especially “Arab nations who can help mobilize Sunni communities in Iraq and Syria, to drive these terrorists from their lands,” he said, adding, “This is American leadership at its best:  We stand with people who fight for their own freedom, and we rally other nations on behalf of our common security and common humanity.”

The speech drew praise from Mark Arabo, a leader in the national Iraqi Christian community, including some 60,000 Iraqi Christians in San Diego County.

“The Iraqi-Christian community stands by the remarks made by President Obama in his address to the nation,” Arabo says. “I will continue to work with members of Congress and the White House to ensure that more is done to secure safety for those religious minorities who wish to stay in Iraq, and safe passage out of the country for those left stateless by ISIL.”

He adds, “Our hope is that the commitment made by America, and the international community is sufficient enough to systematically rid the Middle East of ISIL and it's various elements. And, only after the decomposition of ISIL can we begin the long road towards recovery in a Middle East that is nothing short of broken.”

President Obama noted the bipartisan support for his strategy here in the United States, and welcomed congressional support “to show the world that Americans are united in confronting this danger.”

On the eve of the anniversary of the 9/11 terror attacks in the U.S., the President emphasized that his highest priority remains the security of the American people.  Targeting ISIL is the latest in a series of actions to take the fight to the terrorists, he observed. Those efforts have included killing Osama bin Laden and much of al Qaeda’s leadership in Afghanistan and Pakistan, as well as recent successful strikes against al Qaeda affiliate leaders in Somalia and Yemen—efforts the President said have made American safer.

“Still,” he said, “we continue to face a terrorist threat. We can’t erase every trace of evil from the world, and small groups of killers have the capacity to do great harm.  That was the case before 9/11, and that remains true today.  And that’s why we must remain vigilant as threats emerge.”

Although ISIL calls itself the “Islamic State,” the President emphasized that the terrorist group is neither Islamic nor a state.

“ISIL is not ‘Islamic.’ No religion condones the killing of innocents, and the vast majority of ISIL’s victims have been Muslim,” President Obama said. “And ISIL is certainly not a state. ... It is recognized by no government, nor the people it subjugates. ISIL is a terrorist organization, pure and simple.”

In a region that has known so much bloodshed, these terrorists are unique in their brutality, the President said. “They execute captured prisoners.  They kill children.  They enslave, rape, and force women into marriage.  They threatened a religious minority with genocide.  And in acts of barbarism, they took the lives of two American journalists -- Jim Foley and Steven Sotloff.”

Adding that ISIL’s sole vision is the slaughter of anyone and everyone who stands in its way, the President detailed the threat that ISIL poses to Iraq, Syria, and the broader Middle East. And “if left unchecked,” he said, “these terrorists could pose a growing threat beyond that region, including to the United States.

Intelligence sources believe that thousands of foreigners -– including Europeans and some Americans –- have joined them in Syria and Iraq.  Authorities voice concerns that trained and battle-hardened fighters could try to return to their home countries and carry out deadly attacks.

The President stated that America has the capacity and the will to mobilize the world against terrorists and to help Muslim communities in a fight as well for opportunity, tolerance, and a more hopeful future.

He said America will be remembered for helping to protect innocent people, such as stopping  the massacre of civilians trapped on a mountain top after they had fled ISIL forces.

“That is the difference we make in the world,” the President concluded. “And our own safety, our own security, depends upon our willingness to do what it takes to defend this nation and uphold the values that we stand for –- timeless ideals that will endure long after those who offer only hate and destruction have been vanquished from the Earth.”