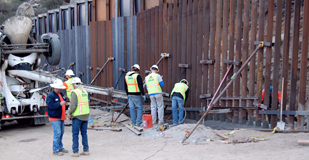 “Today's action by Congress answers my call to bolster the essential work of federal law enforcement officials and improve their ability to partner with state, local, and tribal law enforcement,” the President said of the measure. "This new law will also strengthen our partnership with Mexico in targeting the gangs and criminal organizations that operate on both sides of our shared border.”

The White House also released a fact sheet detailing the extensive efforts taken across the Administration on border security, included significant improvements in results since 2008, when Obama took office:

• Seized, through the combined efforts of CBP and ICE, more than $39.2 million in southbound illegal currency – an increase of more than $29.4 million compared to 2008.

• DOJ-led multi-agency law enforcement investigations (which may include DEA, FBI, ATF, ICE, CBP, and others) “Project Deliverance” resulted in more than 2,200 arrests, seizure of approximately 74 tons of drugs and $154 million in U.S. currency; “Project Coronado” resulted in the arrest of 303 individuals in 19 states and seizure of $3.4 million in U.S. currency, 729 pounds of methamphetamine, 62 kilograms of cocaine, 967 pounds of marijuana, 144 weapons and 109 vehicles; “Operation Xcellerator” resulted in the arrest of more than 750 individuals on narcotics-related charges and the seizure of more than 23 tons of narcotics and more than $59 million in cash;

Additionally, the San Diego DHS Maritime Unified Command, composed of U.S. Coast Guard, CBP, ICE, DEA and other law enforcement partners, saw a more than six-fold increase in maritime drug interdictions in the Pacific waters extending from the Southwest border—seizing 57,437 pounds of drugs in Fiscal Year (FY) 2009 compared to 8,884 pounds seized in FY 2008. Already in FY 2010, the Coast Guard has seized 11,500 pounds of drugs across the San Diego sector.

Statistics reflect a significant reduction in the number of people attempting to cross U.S. borders illegally. CBP statistics show that illegal immigration into the United States is down, with apprehensions between points of entry having dropped as a result. The drop also reflects a doubling in size of the U.S. Border Patrol since 2004 to over 20,000 Border Patrol agents.

The measure passed unanimously in the Senate and by voice vote in the House; no roll call record was taken of how individual legislators voted.