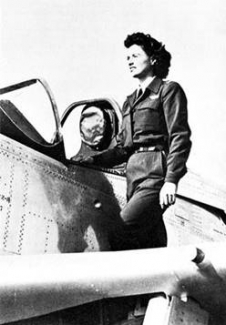 May 20, 2016 (San Diego) – They flew for their country during World War II, and many of them lost their lives. A half century later, now they will be granted a place of honor after their deaths.

The bipartisan McSally-Davis bill to restore the inurnment rights for Women Airforce Service Pilots (WASP) at Arlington National Cemetery has been signed into law by President Barack Obama. The WASP Arlington Inurnment Restoration (AIR) Act, H.R. 4336, overturns a recent decision by the Secretary of the Army that rescinded inurnment eligibility for WASP pilots.

"This bill has always been more than just access to Arlington; it’s been about the respect and recognition for the role these amazing women played in winning World War II,” said Congresswoman Davis, Ranking Member of the Military Personnel Subcommittee. “Arlington has always been considered a special place of honor. If you are laid to rest in Arlington, it is known that you sacrificed to protect and preserve our democracy.”

The WASP were a group of less than 1,100 women who flew non-combat missions during World War II. Their missions included ferrying aircraft across the country, training combat pilots, and towing airborne targets for other aircraft. Thirty-eight WASP women died during their service.

One was Jean Landis, an El Cajon woman who primarily spent her service flying new P-51 Mustang fighters between Long Beach and Newark, N.J., so the airplanes could be shipped over the Atlantic to the European theater. She also flew four other fighters and served in the unit until it was deactivated. Landis and other WASPs were awarded the Congressional gold medal in 2010 and was the subject of a documentary titled “She Wore Silver Wings.”  Landis has since become one of the many former WASP pilots who have become the public face of the effort to restore burial rights for members of this unique military program.

“These amazing women who helped win World War II deserve access to Arlington Cemetery and the full honors we give our war heroes," Davis said in a statement. "It is an injustice that they are being denied access to Arlington, which has always been considered a sacred place of honor."

In 1942, General Henry “Hap” Arnold created the WASP unit with the intention of granting them full military status, though Congress never approved the plan. The program ran from 1942 to 1944.  In 1977, Congress passed legislation retroactively granting active duty status to WASP pilots for the purposes of all laws administered by the VA. In 2009, Congress awarded the WASP the Congressional Gold Medal.

Arlington National Cemetery, which is run by the Army, approved in 2002 active duty designees, including WASP pilots, for military honors and inurnments.  However, in March 2015, then-Secretary of the Army John McHugh reversed this decision.