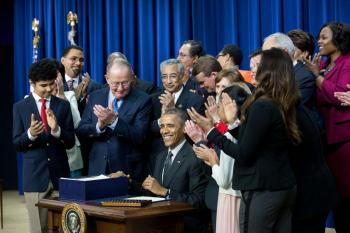 December 11, 2015 (Washington D.C.) – Calling it a “Christmas miracle—a bipartisan bill signing”,  President Barack Obama signed into law the Every Student Succeeds Act, which passed Congress with strong support among both Republicans and Democrats.

The new law preserves the goals and spirit of the No Child Left Behind law enacted under the George W. Bush administration, but eliminates that measure’s unpopular  heavy testing and eases consequences for schools that underperform. The Every Student Succeeds Act offers a more flexible approach to student testing and school accountability, also shifting much of the responsibility for improving troubled schools back to the states.

American Federation of Teachers President Randi Weingarten praised the action, stating, “This law will usher in the most sweeping, positive changes to public education policy in nearly two decades, from pre-K through college.  Today marks the beginning of a joint responsibility for public education, as opposed to the top-down accountability we’ve experienced since the passage of No Child Left Behind.”

Weingarten noted that Congress maintained the best of the intent of the Elementary and Secondary Education Act passed by President Lyndon B. Johnson in 1965 to assure equal access to public education for all students.  But after poor and minority students were left with failing schools, No Child Left Behind was enacted in 2002 as an attempt to remedy that.  But it led to long testing hours in classrooms and left schools that failed to improve sufficiently after several years with only extreme choices, such as closing down, becoming charter schools, lengthening the school dayd, or firing the principal and most staff.

The Every Student Succeeds Act signed by President Obama will give schools choices in how and when to administer tests, allow an annual assessment to be broken down into smaller tests, or find alternative tests to more accurately measure student learning. States must submit their accountability plans to the U.S. Department of Education which retains limited oversight, and those goals for accountability give more weight to graduation rates and test scores than subjective measures.

Congress authorized $24.9 billion in 2016 for the Every Student Succeeds Act, though the total remains subject to a spending bill currently pending in Congress.

According to the AFT, the bill:

Weingarten concludes, “While the new bill doesn’t solve all the problems, it opens the way for states to give teachers the latitude to teach so their kids can reach their potential, and gives us the chance to press the reset button so public schools can be places where teachers want to teach, parents want to send their kids and students are engaged.”

Learn more in this White House briefing document on the bill: https://www.whitehouse.gov/blog/2015/12/07/qa-what-you-need-know-about-f...

to defeat NCLB and bring back local control of education after thirteen years of assault on educators and children.