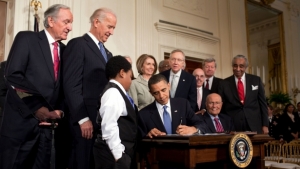 In signing the bill, Obama said he was honoring the memory of his mother, who fought with insurance companies even in her final days battling cancer. Later, he refuted objections of opponents.

“If you like your current insurance, you will keep your current insurance. No government takeover; nobody is changing what you’ve got if you’re happy with it,” the President said. “ If you like your doctor, you will be able to keep your doctor. In fact, more people will keep their doctors because your coverage will be more secure and more stable than it was before I signed this legislation.”

The White House has set up a webpage to explain what healthcare reform will mean for people who have insurance through work, own a small business, have Medicare, are uninsured, or buy their own insurance. View the webpage here: http://www.whitehouse.gov/healthreform. You can also view East County Magazine’s independent analysis of the healthcare bill and its timetable for implementation here: http://www.eastcountymagazine.org/node/2970 . 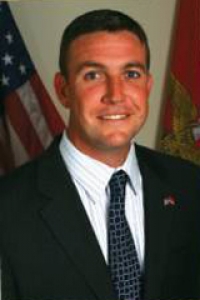 Hunter, whose 52nd Congressional district includes most of East County, called the plan a “government takeover of healthcare” and said that under the measure, “millions of Americans will immediately feel the impact of higher taxes and more regulation while being denied any type of benefits for the next four years. Even then, nothing has been done to address the skyrocketing health care costs that continue to strain the current system and create uncertainty for so many families.”

Lutz, founder of the watchdog group www.CitizensOversight, org., praised the bill as a good first step toward “taming the healthcare monster.” He added, “This was far from any government take-over. nstead, it is a balanced and prudent first step to managing our healthcare system. Unfortunately, it was not supported by my opponent who puts corporate loyalty ahead of the benefit to our community.”

Lutz issued a press release listing the following as top benefits of the plan:

• Good for Americans: Over 95% of Americans will have health insurance coverage, including 32 million who are currently uninsured, once reform is fully implemented.

• Inclusive: Preexisting conditions or becoming sick will no longer be valid excuses for denying or dropping insurance coverage.

• Lower Premiums: Individuals and small businesses who can't afford to purchase insurance on their own will be able to pool together and choose from a variety of competing plans with lower premiums

• Fiscally Responsible: We'll save $138 billion over the next ten years, and a whopping $1.2 trillion in the following ten years.

• Affordable for families and small businesses: Thanks to new tax credits, subsidies, and other assistance.

• Closes the Donut Hole: Seniors on Medicare will pay less for their prescription drugs.

• Good for business and jobs: By reducing health care costs for employers, reform will create or save more than 2.5 million jobs over the next decade.

• Good for Young Adults: who will be able to remain on their families' insurance plans until age 26.

• Community health centers expanded: by an additional $11 billion, doubling the number of patients who can be treated regardless of their insurance or ability to pay.10

The Democratic candidate praised the program as fiscally responsible; the nonpartisan Government Accountability Office has forecast that the measure will cut the federal budget deficit by $138 billion over the next ten years, and $1.2 trillion in the following decade. “Those who say it is going to cost too much are not looking at the number of uninsured that will no longer be treated in expensive emergency rooms and instead will be given preventive care,” Lutz noted. “For small businesses, this is a godsend to allow them to buy insurance for their employees. Most businesses have less than ten employees, for them it has been extremely difficult if not impossible to provide insurance.”

Lutz said the plan will provide millions of Americans with immediate access to healthcare insurance and more benefits as program is phased in over the next four years. “This is not the last thing ever done to control healthcare, it's just a start,” he added. “We need to provide incentives to target preventative treatment rather than disease care. We also have a severe shortage of doctors – especially general practitioners – because the cost of medical school blocks many bright students from entering the profession. I support nonprofit insurance, akin to credit unions, as well as malpractice reform.”

“From the beginning of this debate, I have taken a clear and consistent position in favor of health care reform that is centered on portability, malpractice and private insurance reform, and fiscal responsibility – all of which are missing from the Democratic plan,” the East County Congressman said in a statement posted at his webpage at http://hunter.house.gov/index.php?option=com_content&task=view&id=246&It... . “Every American has a stake in this debate, which will continue in the months and years ahead, and it is important that we continue working to achieve reforms that actually stand to improve the availability and quality of care.”

Lutz countered by calling Hunter “out of step with the needs of this community. In his district is El Cajon, the poorest city in the county with 20.6% of its population below the federal poverty line, and there are many other rural areas that are at or below that level. He should have been leading the fight for health care funds for them,” challenger Lutz concluded. “This reform is essential to getting our domestic house in order and to oppose it is absolutely unconscionable.”

It's good to see that someone who really cares about real people's lives is running for Congress in the 52nd District. The incumbent is out of touch with what's happening to many. The mountainous areas in his district are populated sparsely with people who are starving and living in ancient trailers or worse; they haven't recovered from the multiple fires that raced through their properties and destroyed the lives they used to live. Could he live on $800 a month or less as a retiree? As people age, they need more health services than young people and the rural poor don't even have transportation or gas money to find free services. I could go on and on, but I say, hurray for an opponent to the incumbent congressmember! Ray Lutz has already shown that he knows how to make people's lives better.