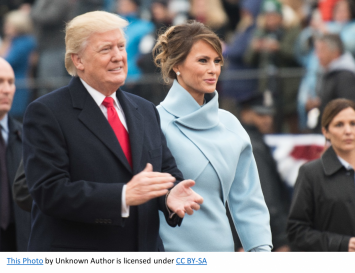 Update 3 p.m.:  The President has been admitted to Walter Reed Hospital.

October 2, 2020 (Washington D.C.) – President Donald Trump and First Lady Melania Trump have both tested positive for COVID-19. The President announced the positive test results last night on Twitter, adding that he and the First Lady, “will begin our quarantine and recovery process immediately” just 32 days before the election.

This morning, White House chief of staff Mark Meadows confirmed that the President has “mild symptoms.” Mrs. Trump has tweeted that she, too, has mild symptoms but is “looking forward to a speedy recovery.”

The President’s illness follows news that his advisor, Hope Hicks, fell ill with the coronavirus after traveling with the President aboard Air Force One. Diagnosis of COVID-19  throws a monkey wrench into campaign plans.

Both President and Mrs. Trump are reportedly in good spirits according to White House spokespersons. However, at 74 years old, President Trump is in a high risk category due to both age and obesity.

A person between  ages of 65 and 74 is five times more likely than a young adult to be admitted to a hospital and 90 times more likely to die of the disease.  Other CDC data indicate that, among COVID-19 patients in their 70s, the death rate for those in good health at the time of their infection was 10%. For those already dealing with a medical condition, the death rate was three times as great: 32%, the Los Angeles Times reports.

Concerns have been raised over potential exposure to many others.  Hicks and Melanie Trump both attended the Presidential debate and refused to wear masks while in the audience, in violation of debate rules requiring masks for everyone except President Trump, his opponent, former Vice President Joe Biden, and moderator Chris Wallace.The President has met with many supporters, White House staffers, and cabinet officials among others.

It can take several tests to determine definitively whether those exposed have contracted the disease. But thus far, announcements today indicate that  Biden has tested negative, as have Vice President Mike Pence and House Speaker Nancy Pelosi, the next in the line of succession. Trump’s youngest son, Barron, and daughter Ivanka Trump have also tested negative.

The COVID-19 diagnosis has forced Trump to cancel several upcoming rallies just weeks before the election, with many people already receiving mail-in ballots. Future debates are also now thrown into doubt, though Senate Leader Mitch McConnell has suggested that if the President feels up to it, future debates could be held remotely.

Get well wishes have poured in from both sides of the political aisle. Biden and Pelosi have offered prayers for the President and First Lady.

House Minority Leader Kevin McCarthy, R-Calif., tweeted, "President Trump is a fighter — through and through. Please join me in praying for a complete and speedy recovery for him and our First Lady!" San Diego County Republican Party Chairman Tony Krvaric tweeted: “We pray for health and a speedy recovery for @realDonaldTrump and @FLOTUS.

Trump has drawn criticism for traveling to a New Jersey fundraiser and possibly infecting donors and supporters after learning he had been exposed to COVID-19 from Hicks. He has long drawn criticism from public health officials for holding large rallies without requiring masks or social distancing; earlier this year former presidential candidate Herman Cain died after contracting COVID-19 at a Republican event which did not follow public health recommendations.

During the contentious presidential debate earlier this week, the President repeatedly laid blame for 200,000 Americans dead of COVID-19 on China, insisting, “It’s China’s fault” and claiming his actions “saved thousands of lives.” He insisted that his administration has done  a “great job” handling the pandemic.

But Biden hammered Trump on not taking steps other nations took back in February and March, as well as the fact that America has 4% of the world’s population, yet 20% of the deaths and 40,000 people a day contracting the potentially deadly virus. He alluded to Trump’s taped statements to journalist Bob Woodward in February that the virus was several times deadlier than flu and posed the most significant national security threat to his administration.

”He knew all the way back in February how serious the crisis was. He knew it was a deadly disease…He said he didn’t tell us or give people a warning of it because he didn’t want to panic the American people…I laid out back in March exactly what we should be doing…We should be providing all the protective gear possible. We should be providing the money the House has passed in order to go out and get people the help they need to keep their businesses open,” Biden said.

Trump insisted that a vaccine will soon be ready, citing Operation Warp Speed. But Biden noted, “This is the same man who told you by Easter, this would be gone away. By the warm weather, it’d be gone. Miraculous, like a miracle.”

Trump accused Biden of wanting to “shut the country down”, while Biden said he would rely on the advice of scientists.  Biden did not propose further shut downs, bud did advocate wearing masks, stating that the head of the Centers for Disease Control (CDC) advised that if everyone wore a masks and did social distancing from now until January, “We’d probably save up to 100,000 lives. It matters.”

Moderator Chris Wallace noted that the President has held large rallies without masks. “Are you not worried about the disease issues, sir?”

Trump fired back, “Well so far we have had no problem whatsoever.”

Biden called Trump “totally irresponsible, the way in which he has handled the social distancing and people wearing masks, basically encouraged them not to.” He maintained, “You can’t fix the economy until you fix the COVID crisis.”

Moderator Chris Wallace has indicated that he will be undergoing COVID-19 testing after potential exposure by the President. Numerous White House staff, cabinet officials, and supporters exposed at Trump’s most recent campaign events have also been advised to get tested and self-quarantine if they were exposed or test positive.

The President will have access to top medical care, unlike many Americans who lack insurance or cannot afford high-cost treatment.

The President’s staff have indicated he hopes to continue running the country and anticipates a swift recovery. He is currently being treated by his personal physician in the White House.

The Constitution contains requirements for how to handle contingencies should a president become unable to serve due to serious illness or worse.

What would happen if the president were to become incapacitated, such as if he were hospitalized and placed on a ventilator, which requires that patients be placed into an induced coma? Vice President Mike Pence would become temporary acting President, as has occurred in the past when presidents have undergone surgery, until the President recovers.

Should the President succumb to COVID-19, the Vice President would become President until the election seated a new President in January.

Since voters technically elect electors, the Republican party could nominate a replacement nominee and the Electoral College’s electors could choose to support the new nominee, if Trump were to defeat Biden.

Should Biden contract COVID and be unable to serve due to death or disability, the Democratic Party similarly could nominate a replacement nominee for electors to certify if Democrats win the election.

Alternatively, if either nominee became unable to serve due to COVID-19, Congress could vote to delay the election until ballots with a new nominee could be prepared – a costly proposition for state and local jurisdictions.  Given the partisan divide between the House and Senate, that prospect appears unlikely.

If an election were thrown into such chaos that determining a winner was deemed impossible, the House of Representatives could ultimately determine the winner.  Even though Democrats control the House, however, there’s no guarantee of a Democrat victory under that scenario, since each state delegation has equal weight with only one vote per delegation. According to Politico, right now, Republicans control 26 delegations to Democrats’ 22, with Pennsylvania tied and Michigan a 7-6 plurality for Democrats, with a 14th seat held by independent Justin Amash.  The House has not decided an election since 1876, when Rutherford B. Hayes became president.

While I wish the president, first lady and Barron wellness, this is no surprise. Trump already killed Herman Cain at the Tulsa rally, and his mask shenanigans have led many of his followers into the hospital. The negligence and incompetence of this administration has caused the virus to spread widely in our country. We are an utter embarrassment internationally. People in other countries pity us, and some are laughing as we flail. Not so great. Maybe this unfortunate news will wake Republicans up to the dangers of Covid-19, and get them to be more socially responsible with mask use? And maybe the Senate will will approve more stimulus checks? These are really needed! You can't double down on dead wrong forever, because reality can severely punish those who ignore it.