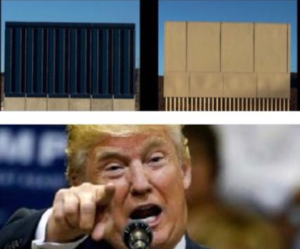 The San Diego Union Tribune suggested that Congressman Duncan Hunter may accompany the President on his trip to the border wall prototypes.

Trump’s visit comes on the heels of his administration filing a lawsuit against California over sanctuary state statutes to protect some undocumented immigrants.

Regarding the lawsuit filed by Attorney General Jeff Sessions, Governor Jerry Brown said “This is basically going to war against the state of California, the engine of the American economy. It’s not wise, it’s not right, and it will not stand.”

But Trump says “The State of California is sheltering dangerous criminals in a brazen and lawless attack on our constitutional system of government,” reports The Star. He also accused California legislators of being “in open defiance of federal law.”

Nuevo Movimento and San Diego Protests plan a Deport Trump Brigade tomorrow from 9am to 2pm at Enrico Fermi Drive and Via de la Amistad.

Indivisible San Diego is hosting a Taxpayers Resist Trump's Wall tomorrow at 9:30am at the corner of F St. and Front St., behind the IRS building.

The San Diego Organizing Project is planning a Press Conference and Rally titled: Interfaith leaders and elected officials to urge Trump to build bridges not walls in San Diego visit tomorrow at noon at Our Lady of Mt. Carmel, 2020 Alaquinas Drive, San Ysidro.

After his visit to San Diego, Trump will also attend a Republican fundraiser in Beverly Hills, where additional protests are planned.

I put two signs up around my property that said no trespassing, young kids doing what young kids do were on my property making a fire pit and drinking. So I put up a fence to keep them out, it cost me $400.00 dollars to try and prevent it from happening, They cut up a portion of the fence and continued using it. The sheriff in alpine said I have to have a penal code on the sign and hire security to prevent the trespassers. Is this right?
I think we should make immigration possible for all countries possible. My Wife came from the UK My mother came from the UK, they became Citizens of the United States. I think My mom was aloud for free based on her age of 2 during WW2, My wife paid 10,000 at age of 20 and has since become a citizen of the US in two years. It was a dream for her to do so. She followed all the rules that I be leave are still in action. She gets upset when other are allowed to just walk in, kind of like cutting in line to a movie that you were waiting to see. I guess some are privileged and don't need to go the route others are supposed to do. It saddens her when others take the illegal course and then demand help. The LA homeless campers on the river started complaining about the hotels they we given for free to get them on there feet again, somethings just don't! I mean really? Sorry I think some folks just don't think.
Yes, I think that would be appropriate. Collusion with Russia, and the affair with Stormy Daniels should suffice.

The Force is strong. Impeach.