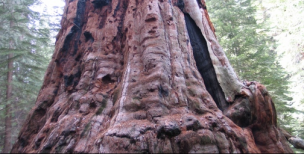 Photo: Boole Tree in Sequoia National Monument is the sixth largest tree in the world, but could be lost under Trump’s order.

April 30, 2017 (San Diego) -- Ten of California's national monuments could be reduced in size or even eliminated as part of a review of all such properties, in an executive order signed last week by President Trump.

The order reportedly instructs U.S. Interior Secretary Ryan Zinke to examine all monuments designated since 1996, during the past three administrations.

Danielle Segura, executive director of the Mojave Desert Land Trust, said she worries that Southern California's Mojave Trails, Sand to Snow and Castle Mountain national monuments - all created in February 2016 - could be threatened.

"And here at the Mojave Desert Land Trust, we fought hard to protect these desert lands, and we're prepared to fight against any latest attacks on them," she said. "These are public lands and they benefit our local community."

President Obama set aside more land than any other chief executive, a move that led some conservative lawmakers to claim executive overreach. It's unclear whether the Trump administration will try to shrink the boundaries of certain parks or revoke some designations altogether. But Segura said any such moves would be unpopular.

"I think the American people value deeply their public lands," Segura said. "I mean, it's really such a part of who we are as people, and our spirit, and I think that this executive order, this initial inquiry, is against who we are as a country."

A bill now before the U.S. Senate would require that all future national monuments be approved by the governor and legislature of the state in which the park is located. The text of Senate Bill 33 is online at congress.gov.