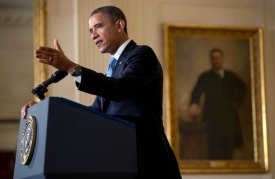 January 14, 2013 (Washington D.C. ) – In a press conference today President Barack Obama today urged Congress to raise the debt ceiling and made clear that his position is non-negotiable. (View video and read transcript.)

The President called that position “irresponsible” and made clear that raising the debt ceiling does not increase spending, but instead authorizes the nation to pay its bills already incurred by Congress.  He likened House Republicans' stance to refusing to pay a restaurant bill after the food has been eaten, adding, “We are not a nation of deadbeats.”

Obama called for bipartisan compromise to reduce debt in a responsible way but urged Congress not to hold the nation “hostage” over the debt ceiling.

If Congress fails to act by the time the debt ceiling is reached as early as mid-February, the Treasury Department would be unable to borrow money to cover existing debts, which means checks could not be issued to a wide range of recipients including Social Security beneficiaries and U.S. military troops.

Failure to raise the debt ceiling could jeopardize the nation’s credit rating and have negative impacts on financial markets worldwide, financial experts have indicated.

Michael Feroli, chief economist at JP Morgan, told the Washington Post that if the U.S. missed a payment to bondholders, the impact would be the “financial market equivalent of that Hieronymus Bosch painting of hell.”

Is quite happy putting my children and grandchildren in debit as long as he looks good. My Republicans will again "crush" him into reality.