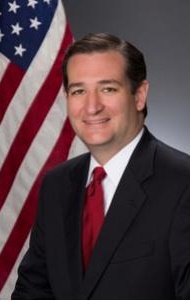 He is slated to speak at a meeting hosted by the San Diego County Republican Party at the Town & Country Resort’s Golden Ballroom in Mission Valley at 6 p.m.  The rally is free, but an RSVP is required and there is a $5 parking fee.

According to an Eventbrite reservation website set up by the party, the event is full but a waiting list has been established.

Cruz, who will also be stopping by Irvine before San Diego, aims to reach out to voters in anticipation of the June 7th primary here.  In an analysis of 13 polls by 8 different pollsters, business mogul and reality TV celebrity Donald Trump leads Cruz by an average of nearly 9%.  The most recent, a Field Poll released yesterday, shows Cruz trailing Trump by 7%.

California has 172 Republican delegates at stake.  14% of the 1,247 needed to secure the GOP nomination, the Los Angeles Times reports.  But California is not a winner-takes-all state.  The Republican Party rules in California award three delegates in each Congressional district to whoever gets a plurality of votes.  In addition, 10 additional delegates are awarded to whichever candidate wins statewide, plus three super delegates who are members of the Republican National Committee also cast votes.

Cruz, a conservative favored by Evangelical voters, has won the last two state primaries handily.  A new AP/GfK poll found that 70% of people polled hold an unfavorable view of Trump, including nearly half of Republican voters.  Trump’s support was strongest among people who consider themselves Tea Party supporters, of whom 68% said they held favorable views of Trump, but nearly every group held negative views of Trump. Cruz was viewed as unfavorable by 59%, while Democrat Hillary Clinton got a 55% unfavorable rating.  Voters had the most positive views of Vermont Senator Bernie Sanders, Clinton's Democratic rival; 48% hold positive views of Sanders and 39% hold negative views of him.

In recent elections, the presidential primary winners have been decided before Californians cast their ballots in June.  But this year the races in both parties remain too close to call—and California could mean the difference between a win outright for Cruz or Trump, or a brokered convention.

If neither Cruz nor Trump can win enough delegates to have a majority on the first ballot at the Republican national convention, then a brokered convention could occur, in which delegates are freed from their pledges on subsequent ballots.  That opens the door for delegates to select either of the two frontrunners, or even a third candidate not currently in the race, such as House Speaker Paul Ryan or former presidential nominee Mitt Romney.