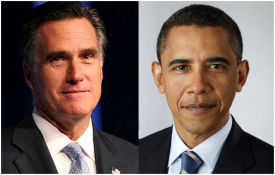 The candidates sparred on issues including the economy, jobs, healthcare, taxes, education, and the deficit.

Post-debate fact-checking found major exaggerations  or distortions by both candidates.  (See  our story on fact-checking the presidential candidates here:  http://www.eastcountymagazine.org/node/11264 )

Scroll down for highlights of the debate, as well as controversy over the moderator and debate format.

President Obama opened by noting that four years ago, the nation faced the worst financial crisis since the Great Depression, with millions of jobs lost. He said 5 million jobs have been created in the private sector since he took office.  He pledged to invest in education and job training, new energy sources and tax code changes to help companies that invest in the U.S.  He wants to  invest money from the wars ending to rebuild America.

Obama faulted Romney’s plan to cut taxes for the wealthy and roll back regulations, asking, “Are we going to double-down on the top-down economic policies that helped to get us into this mess? Or do we embrace a new economic patriotism that says America does best when the middle class does best?”

Governor Romney laid out a five-part plan that includes energy independence to create 4 million jobs, opening up more trade, making sure “people have the skills they need to succeed”, a balanced budget, and championing small business.  He  pledged to repeal the Affordable Healthcare Act (Obamacare) and cut or eliminate funds for programs he views as unnecessary to reduce the deficit.

Romney called the President’s first four years “unsuccessful” and  criticized Obama’s plans for the future as “bigger government, spending more, taxing more.”  In his closing remarks, he added, “There’s no question in my mind that if the president were to be reelected you’ll continue to see a middle-class squeeze with incomes going down and prices going up.”

The President repeatedly faulted Romney for a tax plan that favors the wealthy. By contrast,  Obama said his vision is to provide “ladders of opportunity” and to see that “everybody’s getting a fair shot” and  “everybody’s doing a fair share, and everybody’s playing by the same rules”.

Obama also slammed Romney repeatedly for making broad promises without providing details. For instance, Romney said he would repeal Dodd-Frank, which imposed regulations on Wall Street, but Romney has not said what he would replace that with.  Romney also said he would close deductions and loopholes but has repeatedly failed to say which ones.

“At some point, I think the American people have to ask themselves, is the reason that  Governor Romney is keeping all these plans to replace secret because they’re too good? Is it because somehow middle-class families are going to benefit too much from them? No,” said the President.  He noted that the regulations were imposed by his administration to rein in “reckless behavior” which resulted from deregulation by the prior administration and led to the financial collapse.

Romney made clear he intends to repeal “Obamacare” and wants to see healthcare regulation left up to each state.   Obama countered that repeal would mean “50 million people losing health insurance.”  The President also faulted Romney’s plan to let people buy insurance across state lines noting that “there’s no indication that somehow it is going to help somebody who’s got a pre-existing condition be able to finally buy insurance.”  Romney also faulted the President’ s administration for not reining in the rise in healthcare premiums.

Romney insisted he would lower taxes on middle-income taxes as well as the wealthy and corporations, among other tax cuts proposed.  Asked what he would cut from the budget to pay for such huge tax cuts he stated, “I will eliminate all programs by this test…Is the program so critical it’s worth borrowing money from China to pay for it? And if not, I’ll get rid of it.”  As examples he cited “Obamacare” as well as funds for AMTRAK train service .  He quipped, “I like Big Bird” but added that he would stop the subsidy for PBS public broadcasting.

On Medicare, Romney said he wants “to take the Medicaid dollars that go to states and say to a state, you’re going to get what you got last year, plus inflation, plus 1 percent, and then you’re going to manage your care for your poor in the way you think best.”

Obama countered that Romney’s plan would hurt seniors. “The essence of the plan is that you would turn Medicare into a voucher program,” he said to Romney,” explaining that seniors would have to go out and buy their own private health insurance.   “It was estimated that this would cost the average senior about $6,000 a year,” the President said of vouchers. “My approach is to say, how do we strengthen the system over the long term?”

Romney said he would keep traditional Medicare alongside the voucher program  But OPbama said that would allow private insurers to cherry pick healthy seniors, leaving older and sicker people in Medicare which over time would cause the system to collapse. He noted that the American Association of Retired Persons (AARP) supports the President’s plan.  He also noted that repealing Obamacare would cause seniors to pay $600 more in prescription care.

On education, Obama touted his “Race to the Top” program to improve public schools and said he wants to hire more math and science teachers, as well as create 2 million more slots in community colleges for people to get job training.  Romney backs vouchers to let parents if students, including disabled kids, choose where to send their kids to school.

CONTROVERSY OVER DEBATE QUESTIONS AND MODERATOR

This is the only debate focused on domestic issues.  A second debate will feature questions from undecided voters, while a third will focus on foreign policy.

The debate was moderated by Jim Lehrer of PBS, who drew criticism from other media for losing control of the debate at several points.

Oddly, Lehrer  asked no questions on immigration, the Dream Act, gay marriage or women’s health issues –despite recent controversies over efforts to restrict access to birth control or Vice Presidential candidate Paul Ryan’s inflammatory statements regarding “legitimate rape” in justifying his staunch anti-abortion stance.  The U.S. Supreme Court is one vote away from over-turning Roe v. Wade and potentially making abortion illegal.  With women constituting over  half the population in the U.S. and gays 11%, while Latinos are the largest minority voting segment, such omissions are striking.

Presidential debates used to be moderated by the League of Women Voters, but more recently have shifted to the Commission on Presidential Debates, which has drawn criticism for its corporate donors.  The choice of a male white moderator who ignored the issues of concern to many women  and minorities highlights the problems inherent in the current debate format.