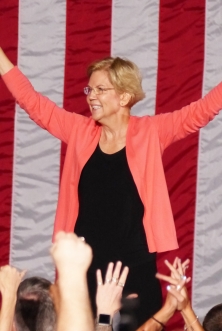 The event opened with a Warren campaign worker revealing why she joined the campaign:  her immigrant parents were deported under the Trump administration and her father died as a result, without access to medical care. 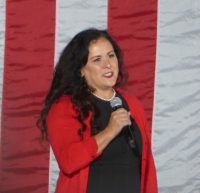 Next up, Assemblymember and long-time labor leader Lorena Gonzalez-Fletcher (photo, right) announced her endorsement of Warren and introduced the Massachusetts Senator. The two powerhouse women embraced on stage to the music of “Nine to Five,” a movie about working class women.  Gonzalez-Fletcher praised Warren's support of working people and the Senator's new labor platform announced earlier in the day.

Warren spoke about her background, told why she’s in the fight to become president, fielded questions, and stayed afterward for selfies with audience members, as is her custom at all campaign appearances.

Raised in Oklahoma as “the surprise” baby in a family with three older brothers who all served in the military, Warren recalled her family’s struggles after her father, a salesman, suffered a massive heart attack. Her family lost their station wagon and nearly lost their home to foreclosure. She recalled her mother tucking her in a night, and then “she’d walk outside the bedroom, close the door, and I could hear her start to cry.”

One day her mother put on her best dress and went to work full-time at Sears answering phones.  “That minimum wage job saved our house and saved our family,” Warren says.

Back then, Warren recalled “a full-time minimum wage job in America would support a family of three.” It would cover a mortgage, utilities and food, she added. “Today, a full time minimum wage job in America will not keep a mama and a baby out of poverty. That is wrong, and that is why I am in this fight,” she pledged, drawing cheers from the crowd.

The difference between then and now is that the government works for giant multi-national corporations, but not for families—a situation Warren wants to change. 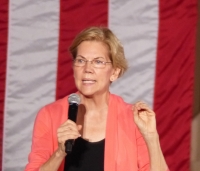 Like many Americans, her upward path was not straightforward.  She wanted to be a teacher from the second grade, but her parents couldn’t afford college. She got a scholarship but dropped out after getting marriage and worked at a minimum wage job. The newlyweds lived in Texas, where she found a commuter college at $50 a semester that she could afford while working part-time as a waitress. She got a degree and became a special needs teacher, her dream job. But when she became pregnant, she says, the principal “wished me luck and hired someone else.”

The family moved to New Jersey, where Warren found a public law school at $450 a semester and attended with “baby on hip”, graduating while pregnant with her second son.   After passing the bar exam, she became a law school instructor.

Driven by a childhood spent worrying about money, Warren says, “I mastered every class that was about money” and taught courses including contract law, commercial law, secure transactions, law and economics, bankruptcy law, and more before being elected to the U.S. Senate.  Her main focus became “Why is the middle class being hollowed out?”

Today the path for people is rockier and steeper than in the past, especially for people of color. Warren blames big money in politics – a government that works well for giant drug companies, but not people who need healthcare great for investors in private prisons and detention centers, but not those whose lives and communities are torn apart, great for big oil companies but not those concerned about climate change.

“That is corruption, pure and simple,” Warren said. Halting corruption will make it possible to attain goals held by many Americans who want better and more affordable healthcare, climate change action, immigration reforms and sensible gun laws, she believes. 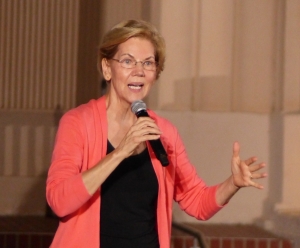 Warren laid out a three-point plan.

Part 2:  Structural economic change:  Warren wants more power for workers including unions to “rebuild America’s middle class” but also wants structural change via a “wealth tax.”  The tax would only apply to people with assets over $50 million  who would pay two cents tax on every dollar over $50 million in assets. She notes that the ultra-wealthy built fortunes by using workers that all Americans helped educate, roads that all Americans paid to build, and other investments funded by all Americans. https://www.factcheck.org/2019/06/facts-on-warrens-wealth-tax-plan/

“What can we do with two cents?”  Warren would invest those revenues from the wealth tax on universal childcare and pre-K care for all children, raising ages of preschool teachers and childcare workers, providing tuition-free community college, technical school and four-year college education and investing in historically black colleges as well as cancelling student loan debt—and claims there would still be money left over.

Part 3:  “We have to protect this democracy.”  She wants a constitutional amendment to protect every citizen’s right to vote and get their votes counted.  “It’s time to end political gerrymandering. We can overturn every single racist voter suppression law in this nation…and overturn Citizens United,” a ruling that allowed nearly unlimited corporate donations to political campaigns.

“We can build an America where every child in this country gets a first-rate education,” Warren said, also calling for opportunities for Americans to get good jobs, start a business or farm, as well as “love the person you love and build the family you want.” She aims to see “opportunity for everyone in this country to be treated in the same way.”

She ended by stating that never in a million years did she think she would run for public office, but “I’m here because I got the opportunity to be a public school teacher,” and later a college teacher, U.S. Senator, and now, a candidate for President of the U.S.  “Let’s win!” she said as the crowd roared. 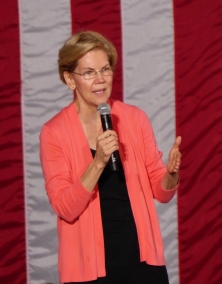 A man named Robby denounced Trump as a “racist” who is “operating a criminal enterprise from the White House.” He asked if Trump is voted out or impeached and Warren wins the election, how Warren proposes to heal relationships with Republicans.

Warren noted that the question is personal, since two of her three brothers are not Democrats.  “For most of America, we have a lot more in common” tan differences, she noted. She blames corruption for not even getting proposals popular with the American public up for a vote in Congress, such as background checks for gun purchases supported by 90% of Americans polled.  She faults Trump for “a strategy of turning people against each other” to distract from corruption lining the pockets of the wealthy at the expense of everyone else.  She wants to restore America’s “best values” in which we work together and care about each other’s children and grandparents.  “I am so optimistic about the kind of country that we can build together,” she said.

A Columbian immigrant asked Warren how she plans to handle police brutality against black and brown people.

Warren called for revision of the criminal justice system, noting that people of color are more apt to be arrested, denied bail, wrongfully convicted for the same crimes committed by whites, and to serve longer sentences. “I’ve got a plan for that,” she said. That includes having a Justice Department that enforces civil rights laws, decriminalizing marijuana, and adopting national policing standards for best practices, holding accountable officers wo don’t follow the law. She also wants to end the cash bail system. “Nobody should go to jail because tey’re broke,” she said, adding that she also supports helping those who served their time succeed when they return to their communities.

A man named John asked how Warren continues to inspire others while under political attack.

“I have a good husband and a great golden retriever,” she quipped. Then she discussed how discouraged she has been by actions of rump, but added, “Things were broken in this country long before Donald Trump.”  She noted how many are struggling to make ends meet, as dreams of home ownership become harder to attain and a costly medical diagnosis can upend lives.

She pledge support for a Medicare for All healthcare system, and said healthcare is a basic human right.  She believes “immigration makes this country stronger” and reiterated, “We’re here to talk about how we build a future that works for everyone.” 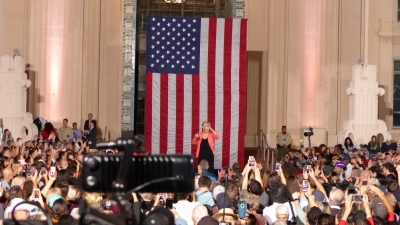 She encouraged people to read her plans in detail at her website, www.ElizabethWarren.com .

Warren said when she decided to run for President, some  Washington experts tried to discourage her from her strong stances, telling her “This is too hard.”  Warren fired by asking what such naysayers said to the abolitionists seeking to end slavery, the suffragists fighting for women’s right to vote, the early union organizers, foot soldiers in the civil rights movement, and LGTB activists.  “They didn’t quit. They got organized. They built a grassroots movement. They persisted—and they changed the course of history.”

Turning to the crowd, she concluded, “This is our moment in American history. Our moment to dream big, fight hard, and win!”

"So there I was, a pregnant Indian..." Fun Fact, Warren's current Indian name is "Two Tales"