September 10, 2015 (San Diego’s East County) – In part IV of our series on the 2015 presidential race, we profile Texas Governor Rick Perry and Wisconsin Governor Scott Walker, both Republicans who are among the most controversial contenders in this race. One is indicted on criminal charges of political favoritism,  the other survived a recall election over his anti-labor actions. 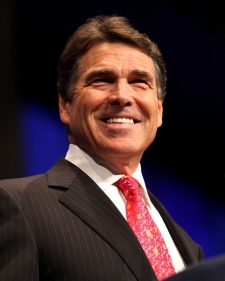 Bio Basics:  Rick Perry served as Texas Governor from 2000 to 2015 and previously served in the Texas legislature. He ran unsuccessfully for president in 2012. He graduated from Texas A&M University in 1972 and has worked as a cotton farmer, Air Force captain and salesman.  Perry has written two books, On My Honor, Why the American Values of the Boy Scouts are Worth Fighting For and Fed Up! Our Fight to Save America from Washington.

Key issues:  Perry supports smaller governments and wants to shut down the federal departments of education and commerce.  A social conservative, he signed bills to restrict abortion including banning all abortions after 20 weeks in Texas.  He touts  his record on job creation and calls for stronger border security to protect against what he calls an “unprecedented surge” of  immigrants over the border.

Controversies:  Perry is the only presidential candidate indicted on felony charges. He is awaiting trial after pleading not guilty to charges of abusing his official power and coercing a public servant.  The charges arose from his efforts to force a county district attorney to resign after her arrest for drunk driving.   He also faced controversies over political favoritism to donors . A Rolling Stone article detailed Perry’s pay-to-play history with corporations and wealthy donors, describing him “selling off government to the highest bidder.”   Racism allegations have also dogged Perry, who has hosted friends at his family’s west Texas hunting camp named “Niggerhead.”  He did, however, sign a hate crimes bill and appoint the first black justice to the Texas Supreme Court, the New York Times reported.

Politifact’s Truth-o-Meter report card found that nearly half of  Perry’s statements that it evaluated were false, mostly false, or “pants on fire” outright lies on issues such as border security, the economy, and his record as governor.

Fascinating fact:  While at Texas A&M University, Perry was active as a “yell leader”,  or male cheerleader and enjoyed playing pranks on classmates, according to Biography.com.  In 2009, he floated the idea that Texas should consider seceding from the United States, The Week reported.

Odds of winning:  Perry’s long odds of winning have dropped after the first Republican debate from t to 1 to a dismal 200 to 1, per Vegas oddsmaker BetVega. 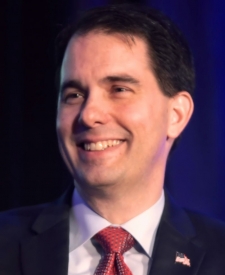 Bio Basics:  Wisconsin Governor Scott Kevin Walker  was born  in 1967, in Colorado Springs, Colorado. His mother was a bookkeeper and his father was a minister. By age 10, his family moved to a small town in Wisconsin. During Walker’s teenage years his interest in politics developed when he became a representative for Wisconsin in Washington, D.C. for the Boys Nation, a two-week American Legion-sponsored leadership government training event. There he met former president Ronald Reagan, who Walker said was an inspiration.

After high school, Walker attended Marquette University and became involved with student government, but did not graduate. However, Walker still pursued a career in politics. By age of 22, Walker ran for a seat on the Wisconsin State Assembly but was unsuccessful. He ran in 1993 and won. Walker was reelected to that seat four times, until he became executive of Milwaukee County in 2002. He was reelected as county executive twice, in 2004 and 2008. He won election as Governor in 2010, survived a 2012 recall election and was reelected in 2014. He announced his candidacy in July for the presidency after forming a campaign committee called “Our American Revival.”

Foreign Policy: According to New York Times, Walker does not agree with Obama’s strategy in dealing with the Islamic State, and stated that he does not mind sending American troops to confront the group in Syria. “We’re not going to wait until they bring the fight to us — we’re going to bring the fight to them, and fight on their soil,” he said

Immigration: Walker is accused on flip-flopping on this issue. He used to say that a pathway to citizenship “make sense,” but he now opposes citizenship for individuals who are in the country illegally and approves greater border security and enforcement immigration laws. His recent change have brought him large amount of attention because crticis are accusing him of changing his stance in order to attract more conservative voters in early nominating states like Iowa.

Controversies: According Biography.com, in 2011 Walker proposed in budget repair bill to eliminate most collective bargaining rights for state workers, except wages. The proposal caused major controversy and created tension among party lines and throughout the entire state of Wisconsin.

The bill was passed by the state Senate in March 2011 and continued to the court. However, Jude Maryann Sumi revoked it stating that it was void because lawmakers broke open-meeting statues during the approval process. In June, the Wisconsin Supreme Court overturned her ruling.

After his actions, Wisconsin residents were so angered by Walker’s anti-labor actions that they wanted to remove him from office, which led to a recall election in June 2012. Nevertheless, he won the recall election making him the first governor in American history to survive a recall election.

Odds of winning: According to the New York Times, Walker believes that he can bring in votes from the Republicans, independents, and conservative Democrats by being direct, straightforward, and tough-sounding similar to his idol, Ronald Reagan. His Midwestern appeal can work in the Republicans favor. In addition, Wisconsin Democrats underestimated Walker’s political talent and popularity.

Even though he idolizes Reagan, critics say he does not have the same communication skills and personal charisma like the former President. Walker is not well educated on foreign policy and national security. Also there are reports that Wisconsin’s budget deficit this year reached $2 billion under Walker’s leadership as Governor, and Wisconsin sits at the bottom among other Midwest states in terms of job growth. He could also have difficulty obtaining votes from Hispanics and other minorities due to his opposition on immigration.  But BetVega gives him 15 to 1 odds, making him still a solid contender.