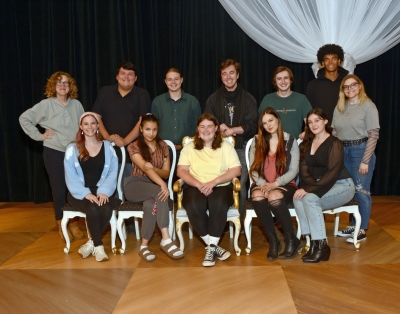 March 19, 2022 (El Cajon) - Jane Austen in the 21st century takes stage in the Grossmont players presentation of Pride and Prejudice by Kate Hamill. Directed by Shana Wilde, this is a fun show--simply delightful. Everyone walked out saying it was excellent.

When the play was advertised as not your grandma's Pride and Prejudice,  I didn't know what to expect and recommended that my mom skip this one. I thought it may even be beyond me. Modernism isn't exactly my forte. But I loved the show.

The show wasn't so modern, more just totally enjoyable, with plenty of over-the-top characters bringing hilarity and fun. But the elements of Pride and Prejudice  were clearly established.

If you don't know the story, it tells of the four Bennet sisters and Mrs. Bennet's attempt to marry them off to available men of note, as was the tradition back then. The infamous Darcy is reluctant to show emotion, filled with pride, while Jane is prejudiced against his pride. 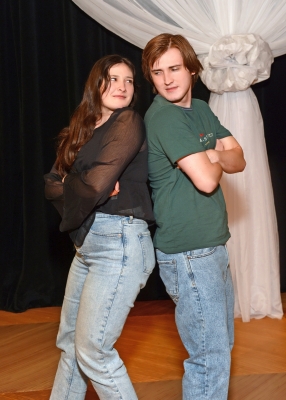 Jane, played by Becca Moore, displayed more of an outspoken, not so mild character. The ever fascinating and romantic Darcy is played by Robin Yerger, quiet and foreboding.  Mrs. Bennet, played by Riley Ellis, is simply wonderful. Mr. Bennet is played by Jacob Human.  He also plays a second character, Charlotte, Jane's friend, and does an awesome job as both. The oldest sister Lizzy is played by Kaitlynn Dupuy. Lydia is played by Camelina Cedillo and Mary Bennet by Diego Messieri. Mr. Bingley is portrayed by Dylan Napieralski. Collins, Miss Bingley and Wickham are all played by the multi-talented Ryan Robbins. And Lady Catherine is played by Lauryn Chapman. These are 10 amazing actors.

The set was simple:  a huge white curtain tied in the middle of the background with an elegant type of white furniture lending to the romance. The costumes by Joan Mathison were exquisite and reminiscent of the era. Nicely done.

My favorite character, Mrs Bennet, keeps running wildly through the stage and Mr. Benett calmly puts up with her.

The play runs Thursday through Sunday, March 18 - 26 at the wonderful new Stagehouse Theatre at Grossmont College.

Coming in May:  All In The Timing by David Ives, six one-act sketches.

Come out and enjoy an evening of fun. 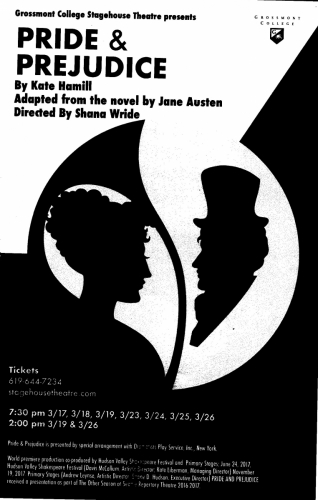