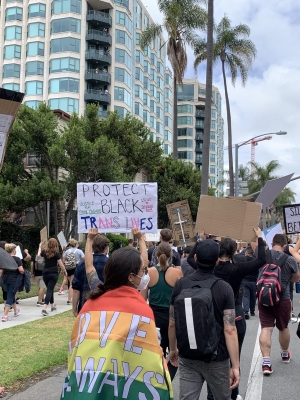 Organizer Charles Albert Brown AKA “Charlie Brown” organized this prideful protest to include black lives in the LGBTQ+ community.

BLM-SD took issue with the fact that the pride event went through the appropriate law enforcement channel. “They are working directly with the police which is against what BLM is for!!” said a BLM Instagram post. “Come thru to the caravan on the 6th.” 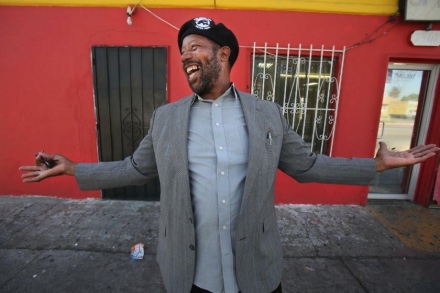 Brown responded to BLM SD on Facebook saying, “I did reach out to the group BLM SD. They were not interested in partnering. That’s fine. That is why I reached out to Long Beach, LA, and DV. Those chapters are excited for this event. I am happy to promote ALL EVENTS here.”

Brown also added, “While your 1st amendment right allows you to assemble anywhere, I wanted to go through the proper channels,” explaining why he had conversations with law enforcement.

Police officers did not get involved in the event but they did rope off side streets and surround the march, similar to how they monitored Thursday’s march on Hillcrest and similar to what they would do in a parade setting.

While many protesters in recent marches have negative feelings toward law enforcement, others were glad to have community cooperation with protest organization as opposed to clashing with police, which was the case in La Mesa one week earlier.

Brown is a well-known organizer in the LGBTQ+ community, a former board member of the San Diego Gay Men's Choir, and a supporter of Drag Out the Vote, a non-partisan, non-profit dedicated to using the art of drag to enlist young voters, specifically those in LGBTQ+ communities.

“I’m happy to hear that they’ve repositioned their caravan so that people can participate in both,” said Brown, “it wasn’t an AND/OR situation, I wanted people to be able to protest wherever they wanted to, it’s not a competition,” Brown told ECM.

“This whole thing started on Tuesday with only 10 people and then went to 50 of my closest friends. By Tuesday night it had been shared and now the interest is up to 7,000,” said Brown “we need to join together, not to sound cliché-ish but we do.”

Brown’s goal is to empower, enlighten and educate.

“I would love to partner with BLM San Diego, I never talked bad about them, I don’t know them,” said Brown.

Brown wanted to form an event that was inclusive of the LGBTQ+  community, whose members are often ostracized from the general discourse of the black movement.

A study published in 2017 found that young transgender women of color have a higher chance of being murdered.

This also comes after the death of a transgender black man named Tony McDade who was killed by police just two weeks ago.

Despite the lack of endorsement from BLM SD, the Prideful Protest was extremely organized. 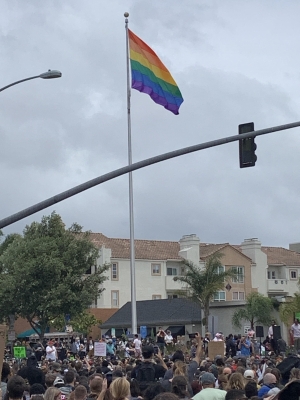 Photo, left: the protest finished at the Pride flag on University & Normal where a makeshift stage was set-up

The start of the protest was equipped with tables, microphones, and a make-shift stage set-up in front of the county building. All speeches had a sign-language translator. The diversity of attendees ranged from young children to senior citizens and included protesters in wheelchairs and other physically challenged individuals.

At BLM protest marches, organizers have repeatedly made efforts to advise marchers to remain peaceful.

At the LGBTQ pride protest, however, one of the speakers who addressed the crowd noted that our nation has a history of violent and at times radical conflict.

Henry Wallace, chairman of the original San Diego Black Panther Party, told the cheering crowd, “Fifty-four years ago…we’re at the same place we was back then, the difference is that we have the whole world in our hands…We started rioting, we started burning shit up because that was the only way we could get our respect,” Wallace said of his times as a panther. “I don’t condone violence but America was born on violence.”

While Wallace received the most crowd support out of the speakers at this event that BLM did not sanction, the others were also prominent community members and included David Thompson Jr. a self-proclaimed proud, gay black man who is also an educator.

Thompson spoke about the freedom he enjoys in San Diego but he understands that being black is not being free. He told the audience that the fight for black freedom is also the fight for queer freedom.

The speeches wrapped up with Corey Gillis of the San Diego Gay Men’s Choir singing a soulful rendition of “A Change is Gonna Come.”

Charles Heggie Of the Party for Socialism and Liberation was in attendance. The party has supported 12 of the protests this week.

“Our party believes that a lot of the different struggles that are happening right now in our country and around the world are unified by a lot of the sources of these kinds of oppression, while the oppression of black people and LGBT people come from unique historical circumstances that converge, especially in America, where race relates to other modes of oppression in our society,” Heggie told ECM.

Heggie received backlash from police while he was providing medical care at the La Mesa protest last weekend.

“I don’t know that I wouldn’t categorize that as a successful event,” Heggie said, “We can have a conversation of what the role of violence is and how much is too much.”

The party is a political organization and ran Jose Cortes for the 50th Congressional District and is also supporting the Freedom Party who has nominated Gloria LaRiva in the upcoming presidential election.

The crowd of a few thousand then left the county building, marched up Ash Street, and made a left on Sixth Ave past Balboa Park.

The protesters were only met with one adversary, a truck of a white male and female who intentionally parked in the middle of the crowd blasting his horn angrily and tried to continue driving through the protesters. Other drivers happily let protesters past and many honked in support, raised signs for the cause, or raised fists in solidarity.

After Sixth Avenue, the group made a right on University and stopped at the pride flag where a make-shift stage was set up, speeches resumed and a large wind instrument band set up to play.

The protest ended fairly early to allow protesters to attend other events.

Despite the peaceful outcome of all of the endeavors, the National Guard was deployed to guard the City/County Building.

Another protest took place in central downtown, while Black Lives Matter San Diego held its only official protest in a countywide driving caravan.

The San Diego Chapter of Black Lives Matter is not listed as an official chapter on the national website.

Los Angeles and Long Beach, the chapters that supported the Prideful Protest are listed as official chapters.

BLM SD has not yet responded to ECM’s press inquiry.