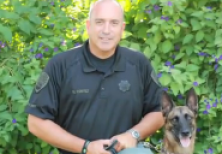 March 25, 2013 (Warner Springs) -- Sgt. Gil Cortez, an officer with the California Rehabilitation Center in Norco, was killed along with his service dog after his vehicle rolled over this morning on State Route 79 half a mile south of San Felipe Road.

Cortez was leading several corrections vehicles taking dogs to conduct drug searches at La Cima Conservation Camp in Julian, a fire training camp for inmates. For unknown reasons, he lost control of the Crown Victoria, which rolled over and landed upright.  Officers rushed to extricate Cortez, who was taken to the Warner Springs Fire Station but died before he could be airlifted to a hospital.

The dog, Mattie, was killed on impact.  The Belgian Malamute had been donated by a San Diego resident, ECM news partner 10 News reported.

CHP spokesman Brian Penning has stated that the vehicle aws traveling the speed limit on a straight stretch of highway when the deadly accident occurred.

Cortez, a 23-year veteran of the state corrections department, is survived by his wife and children.

Jeff Beard, secretary of the California Department of Corrections and Rehabilitation, called Cortez a "valued member of our department," adding that "his untimely passing in the line of duty is a huge loss to all who worked with him. Our thoughts and prayers are with Gil's family, friends and colleagues. We are also deeply saddened by the death of Gil's K-9 partner, Mattie."