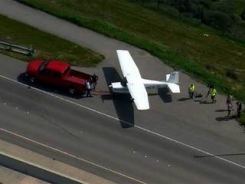 March 22, 2013 (Otay) -- This morning at 11:05, California Highway Patrol communications began receiving reports that a small private plane had been forced to land on the freeway after experiencing mechanical problems.  CHP officers responded to these reports and located the Cessna 150 on the right shoulder of State Route 125, near the Otay River Bridge.

The pilot told officers he was flying from Ensenada to Brown Field when his plane experienced a loss of power.  Realizing he would not be able to make it to the airport, the pilot looked for an alternate landing site.  He was able to safely land the plane on the northbound lanes of the South Bay Expressway.

The pilot, a 58-year old resident of Mexico, was uninjured.  He told investigators he routinely made this flight to visit local family and friends.  The plane will be evaluated by members of the National Transportation Safety Board who will conduct an inquiry into the incident.  Traffic in the area was minimally affected and the plane was safely escorted back to Brown Field by CHP personnel.

If there are additional questions contact Officer Sanchez at jakechp1@gmail.com or (619)220-5492.