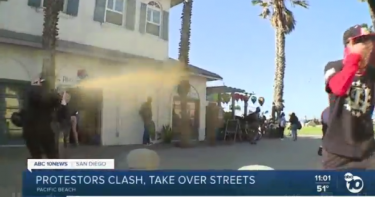 January 12, 2021 (San Diego) --  A clash between self-described pro-Trump “patriots” and counter-protesters who claimed to be part of the antifascist “Antifa” movement on Saturday in Pacific Beach turned violent, 10 News, the Los Angeles Times and Fox 5 report.

The demonstration occurred days after pro-Trump demonstrators seeking to block election certification stormed the U.S. Capitol in a violent rampage that left a police officer and four insurrectionists dead, the Capitol ransacked and legislators terrorized.

According to the Los Angeles Times, “The unrest began around 1 p.m., when a crowd of Black Lives Matter supporters and anti-fascists, many of them dressed in black and wearing “antifa” T-shirts and hats, gathered at the pier to counter a pro-Trump “Patriot March” planned for 2 p.m. The march had been scheduled long before the violent riot at the U.S. Capitol by a pro-Trump mob Wednesday. The counter-protesters held signs that denounced Trump, as well as one that said `No Nazis in PB.’

Police declared an unlawful assembly and arrested three individuals after San Diego Police tweeted that rocks, bottles and eggs were thrown at officers.  News videos show a line of counter-protestors dressed in black marching toward the protestors and a counter-protester spraying what is described as pepper spray at pro-Trump demonstrators.

A Fox News video included a clip, since deleted, that showed Cajon Valley Union School District board member Jill Barto leaning toward a woman in a red shirt and touching her from behind. Barto told ECM she was pushed from behind into the woman, who was her friend. (Photo, left: Screenshot via Fox)

Update: A new video has been posted showing a portion of the altercation from another angle: https://youtu.be/itRwraWA3Tc

On Facebook, some posters who saw the video and screenshots from it believed Barto had tasered the woman from behind and voiced outrage. "There should also be pressure for her to resign, and for Mara Elliot or Summer Stephan to prosecute," wrote liberal activist James Elia, who said he'd once been charged for tasering a "drunk attacker" threatening seals in La Jolla.

ECM spoke by phone with Barto today.  She claims she was pushed from behind into the woman, whom Barto says was not a counter-protester, but actually a friend she came to with to the rally with. “We were going to go to the rally and a concert,” said Barto. She added that her friend’s phone was stolen by an “Antifa” member and said that someone also tried to take Barto’s phone.

According to Barto, “I was pushed from behind into my friend. It was an Antifa medic wearing a gas mask and a bullet proof vest.”  Barto said she sustained injuries and sought medical treatment as a result.

Asked if she had tasered anyone, Barto replied, “Absolutely not.”

The friend was shown by Fox News saying her phone was stolen during the rally.

In the past, Barto has drawn controversy for participating in events with Defend East County, a group formed ostensibly to defend merchants after the La Mesa Riot. But the group was later removed off of Facebook after posts advocating racism and violence.

Barto told ECM, “I am no longer a member of Defend East County,” adding that she left the group in early August after "questionable actions by DEC."

View news videos of the clashes between pro-Trump demonstrators and counter-protestors:

It is time to stop hitting, things you learned when you were a toddler. I don't care if you are a Capitol insurrectionist-seditionist anti-patriot, or a Antifia thug. Knock it off. The political violence we are seeing is a sign of severe social degeneration, which is just what Trump's sponsor Vladimir Putin wants. We have church going people calling for violent murder of members of their own party in the news today, and while I have long admonished the left to acquire firearms for self defense, just please the hell don't if you can't rationally control your emotions. If we keep self defense as our bright line, cooler heads might prevail?