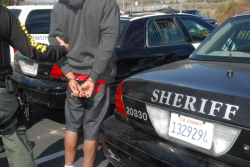 Deputies and officers visited probationers in Santee, Lakeside and El Cajon to see if they were following the conditions of their release, also working with Metropolitan Transit System (MTS) Enforcement at San Diego Trolley stations in the area to conduct compliance checks on passengers.

This operation is part of the Regional Realignment Response Group. The goal is to track known offenders and their associates. Deputies then tie that information to actual crimes and devote resources to address safety issues in our neighborhoods

Realignment went into effect in 2011, in response to a federal court order for California to reduce overcrowding in its prisons. It shifts responsibility for non-violent criminals from the state to local level by sending some offenders to county jails instead of prisons.

The following were arrested during the probation sweep: