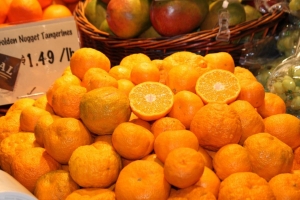 March 20, 2015 (San Diego’s East County)--Get your Tangerine on! Here’s a beauty of a Tangerine: the Golden Nugget Tangerine. If you are not familiar with these tangerines you must give them a try, you will have found a “Golden Nugget” in the produce department. This variety is not found everywhere, but plenty of locally grown Golden Nugget Tangerines from Valley Center are on sale at Barons Market in Alpine. 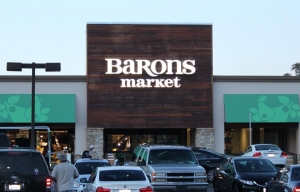 Sometimes the fruit that is the least attractive on the outside is by far the best on the inside; this is certainly true with Golden Nuggets. This seedless, sweet and juicy tangerine is a bit ugly on the outside with a bumpy rind that is moderately easy to peel. A medium sized tangerine – I have yet to find one that is not sweet and juicy no matter what the size. They hold up well, so don’t be afraid to buy a few extras.

A bit of history on the Golden Nugget. It’s a mandarin hybrid, a cross between the Wilking and Kincy mandarins, which are non-commercial breeding varieties. The Gold Nugget tangerine was developed at University of California, Riverside in the 1950's, but was not released until 1975. The trees grow vigorously and produce a good supply of fruit.

As we move into spring, citrus and apples are still in season and there are many varieties available. A favorite of mine is the Pacific Rose apple. Originally from New Zealand and now grown in 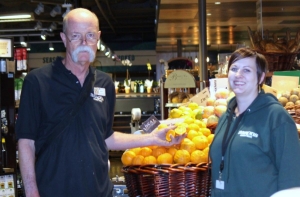 Washington State - this distinctively rosy-red blush apple is a cross between a Gala and a Splendor. A relatively new comer to the produce markets here in the US, it made its debut in 1996.

The Pacific Rose apple is sweet and juicy. Most of us love the Fuji’s, Honey Crisp and Jazz apples and rightfully so, but a great change with sweetness and crunch is the Pacific Rose. Slice some up on a small plate with some cheese and crackers and you have an enjoyable snack ready for tonight’s DVD movie! Baron’s Market also has some of the best looking and tasting Pacific Rose apples I’ve seen this year.

Serves two, for lunch, with a bowl of soup.

2 1/2 tangerines, peeled and separated into segments

Handful of blueberries or blackberries 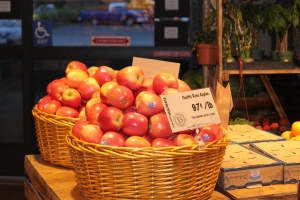 Combine the greens, tangerine segments, berries and cheese in a serving bowl. Combine the remaining ingredients in a small jar and shake well to blend the dressing. Drizzle dressing over the salad, toss and serve.  Slivered almonds and dried cranberries make a good addition.

Greg Dunne has been a produce manager for over 30 years, all here in San Diego County. He's passionate about fruits and vegetables and enjoys his work in the produce department. He can be found taking care of the local, organic and conventional produce at Barons Market in Alpine.