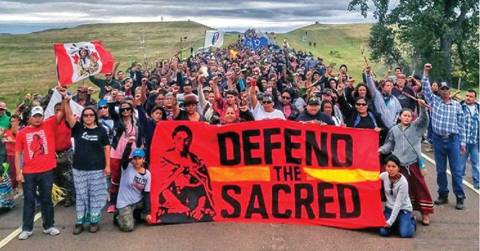 February 21, 2017 (Indianapolis) -- The Society of Professional Journalists and other journalism groups are urging officials in Cannon Ball, North Dakota, to allow journalists to do their jobs at Standing Rock.  SPJ and the Committee to Protect Journalists, Native American Journalists Association, National Press Photographers Association and Online News Association sent a letter today as the planned enforcement of the U.S. Army Corps of Engineers’ evacuation order to protesters at the Dakota Access Pipeline camp in is underway.

The groups contacted the Morton County Sheriff’s Department last week to offer training to law enforcement and journalists at there on ways they can peacefully work together. As of this afternoon, the sheriff’s department had not responded.

The groups additionally urge officials to drop charges against journalists who have been arrested while covering Standing Rock.

“The journalists at Standing Rock are doing the important work of letting the public know what is happening there, and they need to be able to do that work without fear of arrest, violence or confiscation of their equipment,” said SPJ National President Lynn Walsh.

Those arrested have included prominent journalist Amy Goodman with Democracy Now!, a nationally syndicated radio program.  Trespass charges against Goodman were dropped and a judge found no probably cause for riot charges. However charges against some lesser known journalists remain pending.

Journalists at the site have documented dog attacks on protesters by private security personnel and use of tactics by law enforcement against nonviolent protesters including firing of rubber bullets,  tear gas and water cannons in subfreezing temperatures.  The water protectors, as protesters call themselves, have included thousands of people with representation from over 300 Native American tribes nationwide.  The protesters object to potential contamination of water supplies should an oil leak occur, as well as desecration of sacred sites.

The Trump administration has issued a directive for the controversial pipeline construction to proceed, though legal challenges remain.