Update 8:35 p.m. -- The Cowboy Fire is now 719 acres and is 10% contained.  Progress is "excellent" according to Cal-Fire Battalion Chief Nick Schuler. 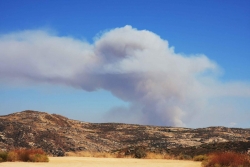 September 2, 2010 (Campo) 7 p.m. --The Cowboy Fire has reached 300 acres, however Cal-Fire public information officer Roxanne Provaznik reports, "Firefighters are beginning to make some progress."  The fire is currently back-burning onto itself and there is minimal threat to structures.

Additional resources have been ordered by the incident commander.  Firefighters will be on scene through the night and a base camp is being set up at Potrero County Park.

The wildfire, reported at 1:13 p.m. , began in an inaccessible area between Campo and Potrero near the Pacific Crest Trail. Incident Page Network indicates the fire is near the junction of Highway 94 and Star Ranch.

Homes are not threatened at this point. Cause of the fire is under investigation.

If you are not set set up to receive the Viejas Wildfire and Emergency Alerts, sign up free at the upper right side of our homepage.

For updates through the night, check the Cal-Fire resources listed in our earlier story on this fire.