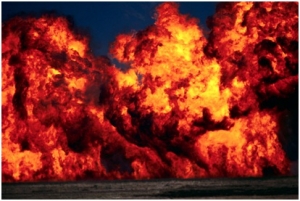 October 31, 2019 (San Diego) – As Santa Ana winds begin to diminish, firefighters are making progress against major wildfires burning across California, as well as a small brush fire on Otay Mountain  that started in Mexico and burned into the U.S. Here are updates on fires statewide as of 3:30 p.m. Friday, with links to incident pages where available:

Copper Fire near Chula Vista:  This fire is 50% contained at 15 acres, according to Cal Fire. It began off Border Road and Canyon Road southeast of Chula Vista on Otay Mountain just south of the international border before burning into the U.S.. https://twitter.com/hashtag/CopperFire?src=hashtag_click

East Fire in Ventura County:  The blaze has burned 1,491 acres and is 10% contained. Two structures have been destroyed in the fire that earlier threatened the Ronald Reagan Library.  http://www.vcemergency.com/

Getty Fire in Los Angeles:  The fire that began near the Getty museum is 35% contained after burning 745 acres and destroying a dozen homes. Most evacuation orders are lifted and the 405 freeway is open.  A tree branch that fell on a power line caused this fire  https://www.lafd.org/news/getty-fire

Hilllside Fire in San Bernadino:  The blaze that started early this morning is 50% contained at 200 acres; highway 18 has reopened.  400 homes remain evacuated and some have burned.  https://inciweb.nwcg.gov/incident/6657/

Kincade Fire in Sonoma County: This devastating blaze that began a week ago has charred 76, 825 acres but is now 60% contained.  It has destroyed 266 structures and injured two people. https://www.fire.ca.gov/incidents/2019/10/23/kincade-fire/

Pacific Palisades Fire in Los Angeles County:  This fire burned 42 acres and is now 75% contained. No structures were burned, but the fire caused four injuries.  https://www.lafd.org/news/pacific-palisades-brush-fire

Saddleridge Fire in Los Angeles Fire:  This fire is 97% contained after burning 8,799 acres and destroying 29 structures in the past 20 days, killing one person and injuring 8.

Taboose Fire in the John Muir Wilderness:  This fire has burned over 10,000 acres and is 75% contained.

46 Fire in Riverside County’s Jurupa Valley:  This fire is 5% contained after burning 300 acres.  It was caused by high winds igniting debris and burned two outbuildings.  Evacuation orders have been lifted. http://www.rvcfire.org/_Layouts/Incident%20Information/IncidentInfoDetail.aspx?4524

On wildfires in California, humidity up with on-shore breeze coming in; freeze warning lifted