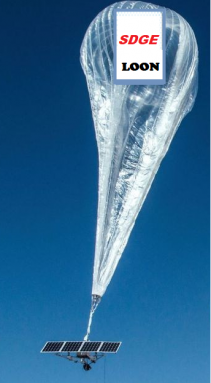 According to the Project Loon website,  the balloons, each equipped with solar panels, fly high in the stratosphere and are designed to withstand winds of over 100 kilometers per hour and temperatures as low as 90 degrees below Celsius.

Each the size of a tennis court, the balloons are designed to stay aloft for up to 100 days – long enough to power communications locally even in the most prolonged power shut-off.

The project has the approval of the California Public Utilities Commission, though it’s yet to be determined whether ratepayers will be charged for the new services during outages.

In Descanso, which had a dozen outages late last year, the news was greeted with cheers and an invitation for SDG&E to fly a Loon brigade in the upcoming Descanso Days parade.

Supervisor Dianne Jacob says she still opposes the planned outages but approves of efforts to improve communications during outages until lines can be built to withstand strong Santa Ana winds without leaving residents in the dark.

“The whole idea of shutting off power whenever the winds blow still seems loony to me,”  she stated, “so having Loon Balloons restore communications for people previously left in the dark does seem fitting.”

Note: While our tale of a Loon fleet over East County is fictitious, the Loon Project is actually real, designed to bring Internet connectivity and cell phone service to remote regions around the world.