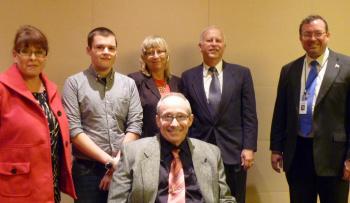 October 23, 2012 (San Diego’s East County)--Assailing what he called the school board’s lack of transparency, Grossmont Union High School District candidate Bill Weaver told a forum Monday night that he was running because he doesn’t trust the current board members.

“We have an expectation of what the bond’s going to be used for and then the smoke and mirrors come out,” said Weaver, a parent of Alpine students and an Alpine Education Foundation board member. “Our money’s not being spent the way you said it’s going to be spent.”

All six candidates running for two seats tackled the screened questions of roughly 30 attendees at the Grossmont Healthcare District conference center in La Mesa. The forum, moderated by the League of Women Voters, was sponsored by East County Magazine.

Read the full story at  http://santee.patch.com/articles/promised-alpine-high-school-sparks-debate-at-school-board-candidate-forum?ncid=newsltuspatc00000001

Q&A: Why is it still an issue? Because it was funded by a public initiative bond measure, twice funded, Prop H ($274 M) and Prop U ($417 M), Further, HS12 is a money maker for the GUHSD, the one and ONLY bond project predicted to make money, and attract new students and ADA CA St Funding, per GUHSD Demographer Mr. Vince O'Hara. There are over 1200 students that would attend, and this would alleviate overcrowding at Granite Hills HS, now populated at around 2800 students (and SAVE money by reducing physical campus needed added classrooms using up bond money because 600 fewer students would be at GHHS) , and with the predicted new students and district growth that will be attracted by an HS12, there would likely be soon about 2,000 students or more, many new to our district, that would fully populate an HS12 campus... it is plain irresponsible to not go forward wth this project; because there is the money! Today, the Steele Canyon Charter HS is busting out of its designed for 1800 student capacity, with its current 2400, and a waiting list to get in!

More silly is; Ignoring that the Granite Hills HS is over crowded, and unsafe because of overcrowding (Prop H was dubbed,"The Overcrowding & Safety Measure") and the whole recent "Boundary Study" which was originally recommended by the GUHSD Bond Advisary Commision (BAC) {June 14, 2007} Report; to prevent the crazy shuffling around of students that the GUHSD Goc. Board just got in hot water over. Prop H was meant to reduce GHHS overcrowding, and reduce unsafe student commutes, Steele Canyon Charter HS included. Almost 700 Alpine/Blossom Valley students go to GHHS, 340 go to Steele Canyon. Both are overcrowded and unsafely impacted. The student body and education suffers at both by sheer mass of students per campus. The Prop H CBOC was owned by appointees', by the Bd. President, Gov. Bd. Member Jim Kelly. The current Prop U CBOC is a bit better, but was/is still intimidated by the GUHSD bureaucracy and the administration, as they inject a political self-interested spin, and excuses are shoveled out. Yes we need watchdogs to oversee the Citizens Bond Oversight Committee ... The CBOC is part of the ineffective bureaucracy, that is why I shudder when I hear, "Strict Oversite" or supervision, that cannot exist under the current system.

Why is the Alpoine school an ongoing issue?  Does anyone still trying to push this through realize that the State has severe budget issues or do they just not care?

Granted, this school may have been promised at one time however it makes no sense to go through with it AT THIS TIME.  An operating buget for ONE school is around $500,000 per year.  All of the schools have cut back on operating costs and it shows when you try to get things done in the school office.  Why would we impact the district budget even more?  Why would we build another school right now when we are pink-slipping teachers?  You pink-slip teachers because you don't have the money, not build a school to shift them over and then hire more administrative staff.

Why build half a school without any facilities for sports?  Why not wait until you can get a complete school?  This way, those kids whose "safety" everyone uses as an argument for a new school won't have to request a transfer to a school so they can participate in sports.  A transfer that would mean that they have to DRIVE to that school.  As for the mom that was killed in a car accident driving her son to school and then the dad committed suicide?  That is NOT the district's fault.  Those were poor decisions and personal emotional issues.  It is sad, but please let's not spin it.

As for Priscilla Screiber, she is mean and rude.  I still have an e-mail. she responded to.  I respectfully lined out reasons why the school board should not pursue the Alpine school AT THIS TIME.  Her response was unhinged.  She told me that SHE would make decisions and that I was "ungrateful" for the improvements being made to our school.  Really?  She acts as if she is using her own financial resources to pay for it.  And the one thing I will agree with her is her comment: "If you choose not to reelect me as a registered voter and taxpayer, that is your choice."

I will NOT vote for Ms. Schreiber and am using social media to encourage others not to as well.  Board members should know that not everyone is going to agree with them and that they SHOULD NOT insult them.  It speaks volumes as to character and class (or the lack therof).