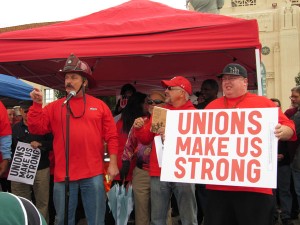 According to Jake Suski, a spokesperson for the yes campaign, "This initiative is exclusively about the stranglehold that special interests have had over California's political system and whether voters are ready to demand reform. Voters are demanding reform and change. They're willing to do something, to say no to special interests."

Opponents of Prop 32 say the measure places unfair restrictions on working people and their unions and that it won’t take money out of politics. Opponents also say the proposition would make it easier for political action committees to buy elections, because it was intentionally written for billionaires to have more power to write their own rules.

Ron Lind, president of United Food and Commercial Workers Local 5, said, "The measure is a wolf in sheep's clothing designed to fool voters into approving a corporate power grab that will lead to even more corporate influence over our political system. What the backers won't say publicly is that they've written a giant loophole to allow for unlimited corporate spending on campaigns while furthering their real agenda of silencing the voices of middle-class workers and their unions."