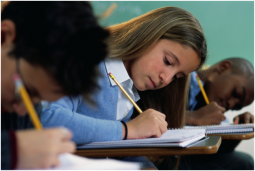 Prop 38 increases taxes on low and middle income earners as well as those with higher incomes, while Prop 30' sincome tax raise targets only the wealthy. Prop 38 imposes restrictions on how education funds can be spent. Prop 38 is limited to K-12 funding, while Prop 30 also includes community colleges. Prop 38 raises taxes over a longer time period.

Prop 38 will raise personal income taxes on for California residents earning more than $7,316 per year in order to fund K-12 schools and childhood programs, along with repaying the state’s dept. The amount of the tax increase is based on income level. The lowest earners, making between $7,316 and $17,346, would pay an additional 0.4 percent in income tax. From there the tax amount goes up on a sliding scale, to 2.2 percent for the highest earners.

Supporters of Prop 38 say it will raise $10 billion each year to pay for the investments for California children, with funds going to school sites, not to district headquarters. These funds, supporters say, enable schools to provide well-rounded education that supports college and a career readiness, helping children succeed in school and in life. Supporters also assert that Prop 38  creates a secure trust that politicians can’t touch, cannot be used to increase salaries or pensions, and prohibits spending more than 1 percent of money raised on administration. Supporters of Prop 38 include Education Trust-West, the California State PTA and various educators.

Opponents of Prop 38 call it the "middle-class income tax hike," saying it locks residents into higher income tax rates for the next 12 years, and will extract $120 billion more tax dollars from Californians, without placing any requirements on schools to improve performance. Opponents say, 24 percent of California students do not graduate from high school, and Prop 38 only pours more money and no accountability into a system that is failing youth. Opponents also question Prop 38’s ability to impact state debt, saying the measure gives Sacramento politicians $3 billion per year for four years to spend any way they choose

Opponents of Prop 38 include the California Chamber of Commerce, the Orange County Board of Education, the California Taxpayer Protection Committee, and the California State Sheriff’s Association, among others. Both the Republican and Democratic parties oppose Prop 38. (Democrats urge voters to support Prop 30 instead for education funding; Republicans oppose both measures).

An opposition statement signed by Thomas Hudson, executive director of the California Taxpayer Protection Committee, among others, states: “Prop 38 contains a special provision hidden in its twenty-seven pages of fine print that prohibits any changes in the measure through 2024 (without another vote of the people), even in the case of waste, fraud or abuse.”