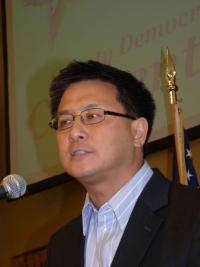 May 9, 2012 (San Diego) – It’s not often that labor groups and the conservative San Diego Taxpayers Association's former president agree on much of anything.  But both are opposed to Proposition A on the June ballot for San Diego residents.

“Last year alone, San Diego received $158 million in construction projects, but this funding would be completely eliminated under Prop A,” Chiang warned.

Scott Barnett, past president of the conservative San Diego Taxpayers Association, echoed that concern.  “San Diego taxpayers need to be aware of the devastating financial impact Proposition A will have on our local economy and region,” he stated, calling Prop A “dangerous.”

However the San Diego Taxpayers Association supports the measure and has defended its stance in an NBC TV interview.

“State funding for street repairs and criticial infrastructure will be in danger within a month of passage of Proposition A,” Pat Zaharopoulos, President of the Middle Class Taxpayers Association warns.

The initiative would prohibit the city of San Diego from requiring contractors to use project-labor agreements that set standards for wages, hiring and benefits for workers on city construction projects, except where required by law. PLAs have generally been supported by labor and opposed by the construction industry.  But the state’s new law mandating funding cuts tied to bans on PLAs has made even many opponents of PLAs take a stand against banning them in San Diego through Prop A.

Supporters are rolling the dice, however, and betting that the courts will overturn SB 829, which has been described as a “power grab” by State Senator Joel Anderson (R-El Cajon).

But voters are not convinced—and most thus far seem disinclined to gamble hundreds of millions of dollars in taxpayer revenues each year on the outcome of legal challenges.

A recent UT San Diego poll showed only 36% support for the measure—well short of the 50% majority needed for passage.

Correction: An earlier version of this story stated that the San Diego Taxpayers Association opposed this measure. In fact the organization supports Prop A but it's past president does not.  SDTA recently defended its support of the measure in an NBC interview.