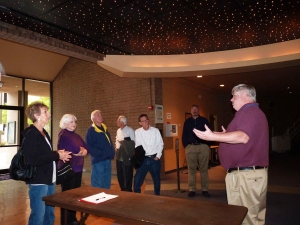 December 6, 2015 (El Cajon ) – El Cajon’s Council has a number of important topics on its agenda for the Council meeting Tuesday at 3 p.m.

Several are on the consent calendar – including a proposal to reject the only bid received for construction renovations on the East County Performing Arts Center (ECPAC).  Although 30 prospective bidders obtained bid packages, only one bid was received.  That bid, from Kinsman Construction Inc. in San Diego, was for over $3.7 million – far above the $2.7 to $2.9 million that an engineer estimated the work should cost.

So the city’s purchasing department and Assistant City Manager recommend rejecting the bid and rebidding the project with revisions form the architect and engineer on scope of work. To minimize delay, staff recommends that Council authorize the City Manager/Director of Public Works to approve the final revised plans and specifications prior to bidding.

The theatre has been closed for several years, in need of repairs including roofing and upgrades to comply with disabled access requirements. A deal proposed by the Rock Church to partner with the city is also on the rocks, ECM has learned, due to cost issues, according to Mayor Bill Wells who said the city intends to reopen ECPAC regardless and that the city should be prepared to shoulder some cost for supporting the arts since this makes El Cajon an attractive place to live and work.

Others have voiced concerns over excessive time periods that the church seeks to lock up in exchange for helping foot construction costs--times that would preclude many other performances.  The church also proposed to build a separate building on city property that would be turned over to the city after 30 years.

The agenda includes a variety of other items including approving an agreement with C.W. Driver for the pre-construction phase services of the El Cajon Animal Care Facility project, a proposal to rezone 25 properties in El Cajon, traffic  signal and pedestrian safety upgrades, and abatement of substandard conditions at a property on  Nielsen Street where the Humane Society seized 60 rabbits being kept illegally in unsanitary conditions.

Council will also meet in a closed door session to discuss litigation filed by Christine Greer, an El Cajon Police officer who has alleged discrimination based on gender, sexual orientation and disability.

Greer is the same office who filed suit against Sergeant Richard Gonsalves alleging he texted nude photos of himself to her and suggested a sexual relationship. Greer has claimed she was passed over for a promotion because  of her complaints about advances by Gonsalves, who was demoted but  retained on the force.

Prior to the 3 p.m. Council meeting on Tuesday, El Cajon Mayor Bill Wells will deliver his state of the city address at 2 p.m. in the City Council Chambers.