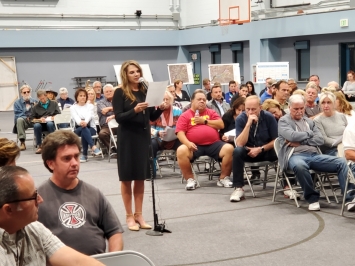 November 14, 2019 (Rancho San Diego) -- If the proposal to replace Cottonwood Golf Course with a sand mine were to be decided by local Rancho San Diego residents, Beverly Hills investor and developer Michael Schlesinger and applicant Greg Brown would be hearing a loud chorus of “nay” votes.

Some 300 local residents crowded into the multi-purpose room at Hillsdale Middle School on Monday night, November 4th to vent their strong opposition to the project in a public scoping meeting called by the County of San Diego Planning and Development Services Department. View county handout and fact sheet. The scoping meeting is required to get public input on what should be included in an upcoming Environmental Impact report.

About a year ago, the project was brought to the attention of the community by activists Elizabeth Urquhart and Barry Jantz, organizers of Stop Cottonwood Sand Mine, at a standing-room-only meeting at the community meeting room at the Rancho San Diego library.

Speaker after speaker on Monday night denounced the project, saying that it will severely degrade the quality of life and environment in terms of health concerns, water quality, and property values in this semi-rural community.

The developers were not present at the meeting. Not a single resident spoke in favor. 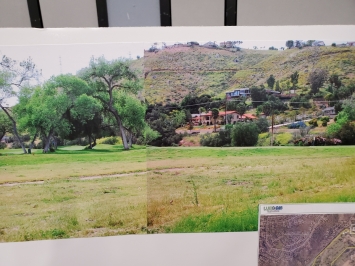 The investment company behind the project envision mining sand material used in the production of concrete. Construction professionals say that there is a major shortage of sand for projects in San Diego County and builders are presently having to import sand from Los Angeles County.

A similar project to mine sand from the El Monte Valley in Lakeside has also been slowly wending through the approval process towards a final decision before the San Diego County Board of Supervisors. Since it was proposed, Lakeside citizens have mounted fierce opposition to the project.

Urquhart was the first speaker at Monday’s scoping meeting on the Cottonwood sand  mine proposed along the Sweetwater River near homes, schools, businesses, and a federal wildlife preserve.

“A sand mine located in the center of a developed residential community will degrade the quality of the environment,” she began. “By creating traffic, safety hazards, harming our air quality, adding significant greenhouse gas emissions, eliminating plants and wildfire, destroying cultural resources and changing the beautiful, peaceful environment we now live in to one that is noisy and dangerous.” 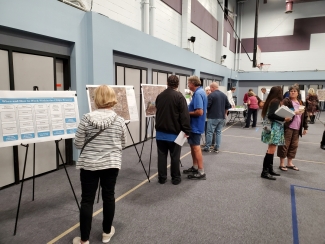 The applicant for the sand mine, Greg Brown, who owns New West Investments in El Cajon, issued a statement to the San Diego Union-Tribune last week expressing that all of the community concerns would be addressed. “This is just the beginning of a long and public process. As a fellow resident of the community, I appreciate and understand the concerns raised, and I think many of them can be addressed over the next several months,” Brown said.

Documents filed with the County of San Diego say that the Cottonwood project area is on 214 acres which would produce over 7 tons of mineral resources over 10 years; the investors would reap an estimated $40 million dollars in profits.

Brown’s documents say that the sand removal would be done in three phases with land remediation taking place after the extraction.

Residents on Willow Glen Road already have gotten a bad taste of the effects of a mining project with the Robertson’s rock quarry plant down the street from the proposed Cottonwood sand mine site at 2266 Willow Glen Drive. Large trucks haul rock aggregate from the quarry all-day Monday through Friday from early in the morning to late evening.

Besides the dust coming from the project, the coalition against the project says that a sand mine would add at least 176 trips of heavy traffic or an additional 88 round trips to Willow Glen Drive every day. Those trucks would carry 25 tons of sand in each truck equating to 4,400,000 pounds of sand traveling on the road every day.

“My husband and I moved to the Rancho San Diego area because we get the best of a rural and urban area. We came here for the peace and quiet,” Thelma Moore said to East County Magazine. “This project is going to ruin everything for a lot of people.” 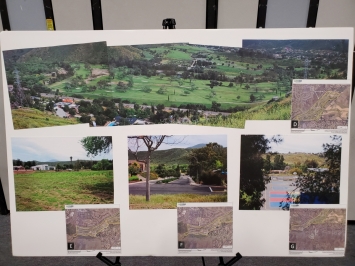 Wendy L. Tinsley Becker with the Valle De Oro Planning Group asked the members of the County Planning and Development Services Department whether political considerations could override the community’s strong opposition to the public.

“Is there a threshold that exists to give favor to a mining and reclamation project despite substantial adverse change? Is there a precedent for issuing a statement of overriding considerations for these types of projects? If the sand is a valued resource, is that resource considered more important by the county during the EIR (Environmental Impact Report) process?” Becker asked.

County Planner Robert Hingtgen responded, “During the EIR preparation, if significant impacts are identified or can be mitigated, we present that first to the planning commission. They are the ones who decide whether those statements…if they are of acceptable significant findings. And we have to prepare overriding considerations as to why that would be,” he said.

In its heyday when it was built in 1962, the Cottonwood Golf Course offered local golfers two 18-hole golf courses in a picturesque landscape of the local mountains in the Jamul valley and the federally-protected Sweetwater River. But with less people playing golf, the golf course hit hard times, causing the owner to file a Chapter 11 reorganization plan in Federal bankruptcy court. 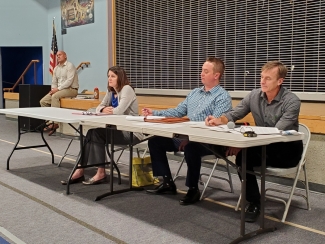 Curiously quiet on the project is the Sycuan Native American tribe, which owns the Singing Hills Golf Resort at Sycuan resort near Cottonwood. In addition to have a nationally recognized golf course, the resort also has a hotel and upper-crust restaurant and bar on the premises. East County Magazine has made several attempts over the past year for local tribe leaders to offer comment about the sand mine project, but e-mails and phone messages have gone unanswered.

County representatives said the sand mining project still has ways to go before it is even considered and voted on by the County Planning Commission and by County Supervisors, if planners’ decision is appealed. The application still must be processed through the many steps, which includes more community meetings

Jantz closed the meeting by warning gathered residents to not grow complacent despite all of the outward opposition to the project. 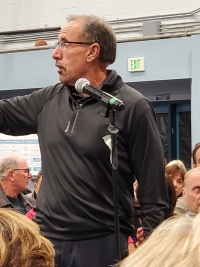 How to submit comments by the Nov. 22 deadline:

An Environmental Impact Report (EIR) is required to be prepared for the project pursuant to the California Environmental Quality Act (CEQA). Prior to beginning the preparation of the EIR, CEQA requires that the lead agency (in this case, the County of San Diego) consider public input on environmental issues that should be analyzed within the EIR. This is referred to as the Notice of Preparation (NOP) scoping period.

During this 30-day scoping period, written comments can be provided to the County on:

• Effects of the project that may damage the physical environment;

• Alternatives to the project that may be less damaging to the environment; and

• Modifications to the project that may lessen the project’s environmental effects.

Citizens may weigh-in on the project by sending e-mails addressed to County Planner Robert Hingtgen (robert.hingtgen@sdcounty.ca.gov) until Friday, Nov. 22 at 4 p.m.