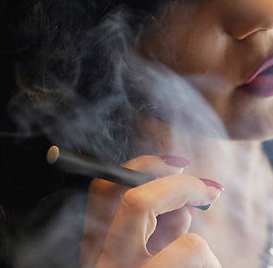 Senator Leno says that these product manufacturers are really selling addiction.  He adds,, “Like traditional cigarettes, e-cigarettes deliver nicotine in a cloud of other toxic chemicals, and their use should be restricted equally under state law in order to protect health.”

His measure would also strengthen enforcement against sales of electronic cigarettes and related products to minors.

Locally, some jurisdictions have already moved to restrict e-cigarettes, including the city of El Cajon and County Supervisors. But other cities have declined to take action.  The state measure aims to protect public health throughout California.

The Centers for Disease Control has reported an alarming rise in use of such devices among teenagers, and locally educators have testified to use of these types of products by even very young teens in classrooms, with products camouflaged to resemble marking pens and even asthma inhalers.

Similar legislation in the past has met with fierce opposition from the tobacco industry, including makers of devices such as “hookah pens” and “vape pipes,” the Sacramento Bee reports.

The measure could face substantial opposition in the Legislature due to the increasing influence of special interests in the state Capitol.

In the past,prominent Republican legislators have frequently taken large contributions from tobacco companies to lobby against anti-tobacco bills. But last year, the Sacramento Bee reported that   several anti-smoking bills were shelved after as an increasing number of Democratic legislators also accepted campaign cash from cigarette manufacturers.

Whether legislators will enact reforms to protect teens and others from dangers posed by vaping and e-ciagarettes, or allow proposed reforms to go up in smoke, remains to be seen.