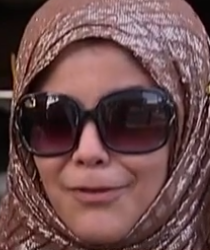 April 16, 2014 (El Cajon)—Yesterday the prosecution rested its case in the trial of Kassim Alhimidi, an Iraqi immigrant who is accused of murdering his wife, Shaima Alawadi.  Alhimidi’s fate now rests in the hands of a jury at the courthouse in El Cajon.

The killer repeatedly struck Alawadi in the head from behind while she was sitting at a computer in her El Cajon home in March 2012.  Police believe the murderer was someone  the victim knew and trusted, since she was not wearing her hijab, a traditional head scarf, during the attack.

The evidence is purely circumstantial.  The murder weapon was not found. No blood evidence or other forensic evidence was presented.  No eyewitness has come forward, and Alhimidi has repeatedly denied killing his wife, sobbing heavily in the courtroom.

Police believe the murder weapon was mostly likely a tire iron. The tire iron found in Alhimidi’s car had no blood on it.

The prosecution’s case rests heavily on testimony given by the couple’s daughter, Fatima.  Fatima had stayed home from school was in the home when the murder occurred and has said she heard her mother squeal, followed by a sound of breaking glass.

Shaima Alawadi reportedly told relatives she “couldn’t stand” her husband and had taken out divorce papers. The couple had previously separated and then got back together. They have five children.

Children of the couple have said that their parents' relationship had never been violent.

Alhimidi denied problems in the relationship when questioned by police.  He also initially said he was not near the crime scene the morning of the killing, until police showed him a doctored photo of his van, driven by police after it was impounded to the scene, with the date stamp altered.  The defense suggested Alhimidi may have been confused over the time due to the time change that had just occurred at  Daylight Savings Time.

After his wife was taken to the hospital, Alhimidi asked relatives “What do you think will happen if she wakes up and says I hit her?” the prosecutor told jurors.

But the defense attorney said that Alhimidi loved his wife, and when he learned she had suffered a brain injury, pleaded with doctors to “take my brain” and donate it to let his wife live.

Alhimidi traveled to Iraq for his wife’s memorial service, and Iraqi officials there offered to allow him to stay. But he returned to the U.S., saying he was confident justice would be done, according to the defense.

A note left next to Alawadi’s body read, “This is my country. Go back to yours, terrorist.”  It was a photocopy of a similar note left at the home a week before.  No handwriting analysis of the note was presented at trial, leaving the question of who wrote it—and why--an intriguing unanswered question.

The day of the murder, Fatima told police she had seen a white man running from the murder scene. Police showed her a lineup, but she could not identify the man.  Weeks later she changed her story and told police she believed her father was the killer.

It is unclear whether Fatima actually saw someone else running away and if so, was that the murderer?  If the story was not true, why did she tell police she saw a stranger fleeing the scene?  Some have suggested Fatima may have been covering up for someone else—herself, her boyfriend, or perhaps even her father.

Fatima had been distraught over her parents’ efforts to push her into an arranged marriage with a Muslim man in Iraq. Fatima had a romantic involvement with a Chaldean Christian man locally.  Police had been called once previously after a passerby reported seeing Fatima and her boyfriend in a car together; she also admitted she had snuck him into the family’s home.

Fatima had run away numerous times and even jumped out of a moving car, injuring herself as she sought to get away from her mother.   Still police have maintained that they do not suspect Fatima, who gave numerous conflicting statements during her testimony on the witness stand.

When his wife was removed from life support  three days after the assault, Alhimidi asked forgiveness, which his attorney says is customary in the Islamic faith.  The prosecutor has contended that his emotional displays at her beside and in court were mere acting, while the defense maintains Alhimidi has been victimized too, and is grieving the loss of his wife—and potentially his freedom.

He faces 26 years to life in prison if convicted.

The outcome  is far from certain, and even the prosecutor has contended that this not airtight.