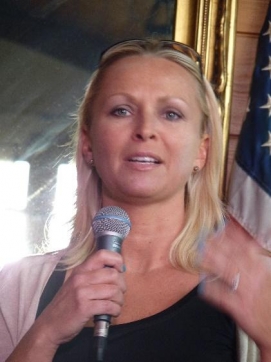 By Miriam Raftery
August 6, 2019 (San Diego) – Federal prosecutors have filed a request in U.S. District Court asking to postpone the sentencing date for Margaret Hunter until December 2, after the trial of her husband, Congressman Duncan Hunter (R-Alpine), the San Diego Union-Tribune reports.
Margaret Hunter has pleaded guilty to one count of conspiracy and was scheduled to be sentenced on September 16.  She and her husband were initially charged with 60 counts including misappropriating a quarter of a million dollars in campaign funds for personal use, then filing false documents to cover up the crimes.
Hunter’s wife is now reportedly cooperating with the prosecution in the case against Rep. Hunter, which is slated to begin September 10th.  Delaying her sentencing also provides prosecutors with leverage; the court filing indicates her sentence should be determined after she fulfills her “ongoing cooperation obligations.”  It is expected she would receive a lighter sentence for providing evidence and possibly testimony in the case against her husband.
Those expenditures included family vacations to Italy and Hawaii, jewelry, oral surgery, private school tuition for their children, first class airfare for a pet rabbit, and affairs Hunter allegedly had with five women, including lobbyists and Congressional staffers.
Rep. Hunter’s trial is slated to begin September 10th. He has pleaded not guilty and sought to have prosecutors dismissed as politically biased for attending a fundraiser for Hillary Clinton, despite the fact that his own lawyer attended the same event.
The judge declined to remove prosecutors from the case and also denied a motion by Hunter’s legal team to move the trial outside of San Diego County.
The Los Angeles Times has reported that if found guilty, Rep. Hunter could be sentenced to up to five years in federal prison. If convicted, he would not be the first San Diego Congressman to wind up behind bars.  Rep. Randy “Duke” Cunningham (R-San Diego) served eight years in prison after pleading guilty to accepting bribes from defense contractors, as well as fraud and tax evasion charges.
Thus far, Hunter has said he has no intention of resigning and has been raising funds to run for reelection in the March primary, though a portion of his campaign contributions have been expended on his legal defense, which the law allows. If he does resign or is removed by the House of Representatives, it could trigger a special election.
Democrat Ammar Campa-Najjar is actively campaigning for the 50th Congressional district seat held by Hunter. Five Republicans have also announced plans to run, though some have indicated they would only file to run if Hunter is no longer in the race. The Republican candidates are talk show host/former San Diego Councilman Carl DeMaio (who does not live in the district), El Cajon Mayor Bill Wells, former Escondido Mayor Sa Abed, retired Navy Seal Larry Wilske, and Temecula Councilman Matt Rahn.