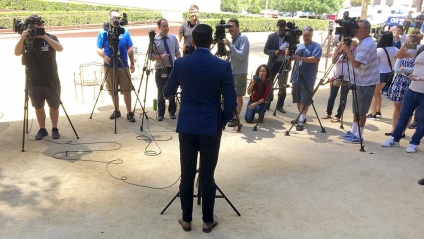 In a 33-minute flurry of rulings, federal Judge Thomas J. Whelan handed setback after setback to Hunter lead lawyer Gregory A. Vega, hoping to keep his Republican client out of prison on charges including wire fraud, falsification of records and embezzling campaign contributions. He denies them all.

Grabbing the most attention was Whelan allowing prosecutors to introduce evidence of Hunter’s alleged extramarital affairs — five since April 2009 by the government’s count.

But Assistant U.S. Attorneys Emily Allen and Mark Conover also got Whelan to exclude certain evidence or arguments at a scheduled September trial.

Hunter can’t tell a jury he’s the victim of a political witch hunt — that Allen and another San Diego prosecutor once attended a Hillary Clinton fundraiser, with a photo arranged by the Secret Service.

The 42-year-old Marine veteran can’t supply evidence of “character and good acts,” but his personal finances are fair game.

Only two motions were denied — both from Vega. In one, Hunter’s lawyer argued that since the government hasn’t specified some false Federal Election Commission entries, those charges are almost “trial by ambush” or “like the needle in the haystack.”

Conover said such information would be supplied to Hunter’s team before trial.

Whelan said 31 motions were submitted in recent weeks, but only 24 made it under the deadline of close of business Friday. So he set a hearing for 10 a.m. Monday, July 8, to decide the late arrivals.

Those include a Hunter request to move the trial from San Diego to the sprawling Eastern District of California, where the main courthouses are in Fresno and Sacramento. Others involve efforts to dismiss all charges.

Some decisions were deferred until after the trial begins, including whether Hunter’s wife, Margaret, should be allowed to testify. Last month, she pleaded guilty to a single count of misusing campaign funds for a $14,000-plus Italian vacation while implicating her husband in a raft of other federal offenses. (Four motions were declared moot, and several were withdrawn.)

By contrast, Vega noted, the indictment doesn’t refer to other Hunter dealings as “a platonic relationship.”

“I’m afraid that will be the focus, instead of the evidence,” Vega said of Hunter’s “personal indiscretions.”

Despite Whelan’s ruling that the Hillary Clinton fundraiser can’t be used at trial, Hunter’s father went to the court of public opinion after watching the third-floor hearing in downtown San Diego. (Also lending moral support was El Cajon Valley Union school board member Jill Barto, who said she’s known the Hunter family for “30-plus years.”)

Former Rep. Duncan Lee Hunter, 71, handed out stapled 10-page exhibits and motions to reporters. They contained what the elder Hunter called “smoking gun” proof that prosecutors Allen and Alana Robinson were fans of Hillary Clinton and attended a La Jolla fundraiser for the Democratic presidential candidate in August 2015 — and thus had political motivations to prosecute early Trump-endorser Hunter.

The elder Hunter made his case in a packed elevator (where all 10 occupants got off at the wrong floor and had to return for another trip). Then he met about eight camera crews outside the Edward J. Schwartz U.S. Courthouse.

(On his way out the doors, he was greeted by nearly two dozen protesters. One woman, displaying a sign that said “Google Duncan Hunter Ethics,” cried: “Apples don’t fall far from the tree!”)

Holding up the handout, the 28-year former congressman called the document the most important of all the motions heard.

Despite earlier government declarations that the pair were on official business, “We have an email [from the Secret Service] that plainly says they actually came to get a photo [opportunity],” he said.

Also taking advantage of media presence was Ammar Campa-Najjar, the Democrat who won 48.3 percent of the vote in his losing bid to oust Hunter in November 2018 and is trying again in 2020.

Saying he was there at the request of supporters, Campa-Najjar defended his recent video in which he declared that he’d been told that the six-term incumbent “is going to resign“ and a special election would be held in three to four months.

“A lot of folks have been telling me, [who] don’t want to be on the record, that he will be resigning,” he said. “Just various people who know the [campaign] or know the machinations.”

"Why would they tell you?" he was asked:

“Because I’m a candidate running for Congress,” he said. “And we see polling coming out that is coming out for Carl DeMaio, Darrell Issa — a bunch of rumors coming out. My job is to be ready for any possibility.”

Times of San Diego further asked: Is it responsible to pass on rumors?

“It’s responsible for me to say: Let’s be prepared for anything — and make sure we’re not being caught flat-footed” he replied. “I want to make sure that our supporters are ready for whatever outcome.”

After explaining his assertions as “sharing information,” likening candidates to journalists, Campa-Najjar said: “Do I think he should resign? That’s really up to him.”

Monday night, San Diego County Registrar of Voters Michael Vu said via email that he’s heard of no move to have a special election in the 50th Congressional District.

In any case, Vu said, such an election wouldn’t happen as soon as three or four months.

“The timing would depend on when the vacancy occurs,” he said. “That said, the Elections Code speaks of it occurring between 126 to 140 days after the governor’s proclamation. If it is within 180 days of a regular statewide election (e.g. March 2020 Presidential Primary), the vacancy election could be consolidated with it.”

“Here is the Elections Code citation that spells it out,” Vu said, sharing a link.

The story unfolds, as dark truths come to light.