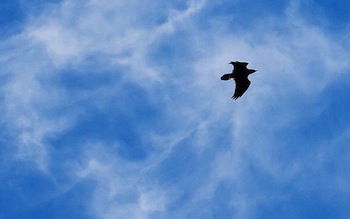 September 12, 2013 (Lakeside) – A dead crow found in Lakeside has tested positive for West Nile virus and San Diego County officials are reminding people to protect themselves from mosquitoes that can transmit the disease.

The dead American crow was the sixth bird that has tested positive this year for the disease, which can kill people in rare cases.

While no one in San Diego County has been diagnosed with West Nile virus this year, 117 people across the state have contracted it, and 2012 was one of the worst on record across the United States with 286 deaths.

“The good news is that people can protect themselves by taking some simple steps,” said Jack Miller, director of the County Department of Environmental Health. “Use insect repellent to keep mosquitoes away; wear long-sleeve shirts and pants if you’re out at dusk when mosquitoes like to feed; and clear your yard or home of potential mosquito breeding areas.”

Miller said the County’s new free West Nile virus smartphone app makes it easier than ever before for people to report neglected pools, mosquito breeding grounds or dead birds — and to get important updates about the disease.

Anyone with an iPhone, Android or Blackberry smartphone can submit anonymous reports to County Vector Control by using the app to snap a photo, type in the address and send it in.

The app is available on the County App Center, at http://www.sdcounty.ca.gov/appcenter/. Just look for the “Fight the Bite” logo.

West Nile virus is mainly a bird disease that can be spread to people when mosquitoes feed on the blood of an infected animal and then a person. Eight out 10 people who become infected with West Nile virus won’t suffer any symptoms at all. Most people who do get sick will suffer mild symptoms: headache, fever, nausea, fatigue, skin rash or swollen glands.

However, in rare cases, people can suffer serious neurologic complications that can be life threatening. The risk of complications increases for those over age 50, and for people with weakened immune systems.